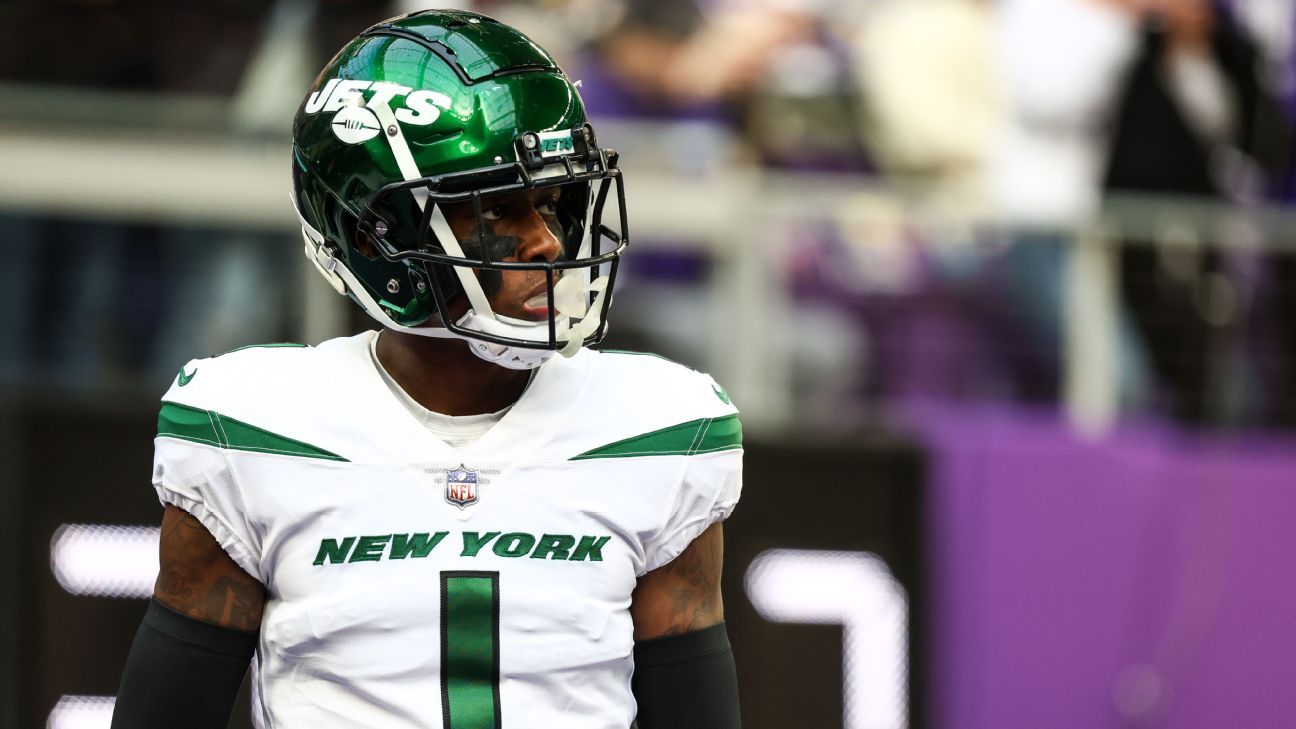 The 2022 NFL season‘s rookie class was truly impressive. Two running backs broke 1,000 rushing yards, while two receivers hit 1,000 receiving yards. Seven players scored at least five times from scrimmage. Twelve first-year defenders had three or more sacks, four had 100-plus tackles, and nine had three or more interceptions. Eight quarterbacks started at least one game, and one currently has his team in the divisional round of the playoffs.

So how did the rookies stack up this season? Let’s rank the top 10, taking only the regular season into consideration. We polled our own Matt Bowen, Jeff Legwold, Matt Miller and Jordan Reid for their personal lists and combined them to make a consensus ranking of the top 10 rookies. Our experts then weighed in on each player who made the list, along with a few who fell just short. Finally, they picked out a riser to watch, an underperforming first-rounder, an overperforming late-rounder and someone who could break out in their sophomore campaign. We begin with a fairly obvious top-ranked player.

Why he’s here: He is exactly who we thought he was during the lead-up to the 2022 draft. He is explosive and confident, has ball skills and shows the ability to bounce back quickly from the rare bobbles he had in his rookie season. His 20 pass breakups tied for the NFL lead with Jalen Ramsey. — Legwold

Why he’s here: This is what we expected from Hutchinson based on his college tape at Michigan. He’s a two-way defensive end with the ability to disrupt the pocket and set a hard edge against the run game. And the urgency he brings to the position creates more opportunities to track the ball and finish plays. His 46 pressures led all rookies this year. — Bowen

Going forward: Hutchinson has quickly become a leader of the Lions’ defense. A versatile pass-rusher who plays with a relentless nature, he doesn’t seem to have an off switch. He is constantly on the attack, managing to impact the games in multiple ways. His alignment versatility allows defensive coordinator Aaron Glenn to use his skill set at multiple spots in the defense, and he will continue to be a big part of what Detroit does defensively. — Reid

Why he’s here: Despite playing without a great quarterback, Olave posted more than 1,000 yards and became a go-to target with the Saints. Receiver is one of the hardest positions to transition from college to pro and have immediate success, but he proved he’s a player the Saints can build around. His 14.5 yards per catch ranked fourth among rookies, and he had just one drop all year. — Miller

Going forward: Olave had 78 more targets and 44 more receptions than the next New Orleans wide receiver, so the Saints need to find a way to get him some help and take a little of the focus off him. But even without a clear No. 2 receiver on the field, Olave authored just the third 1,000-yard season for a rookie in franchise history. There’s no reason more won’t follow if he gets a little stronger, allowing him to win even more often on contested catches. — Legwold

Why he’s here: Wilson has quickly shown that he can be a No. 1 option in an NFL offense. He managed to produce without any type of consistency under center, which is the sign of a big-time talent at the position. Wilson is a sudden and creative route runner who also has the flexibility to contort his body to make difficult catches. His 56 first-down catches led all rookies. — Reid

Going forward: Wilson can be a star in this league — if the Jets find an answer at the quarterback position. He is an easy and sudden mover at every level of the route tree. And Wilson has the dynamic ability to create game-changing plays. — Bowen

Why he’s here: His combination of speed (4.36 seconds in the 40-yard dash at the combine) and length (a tackle-like arm span of 79 inches) are rare. And his route awareness, aided by three seasons as a wide receiver in college, keeps him in the right spot, even as he still learns the nuances of the position. His six interceptions tied for the NFL lead, and only four players had more defensive snaps (1,095). — Legwold

Going forward: Woolen is more than just a player taking advantage of a great scheme. He’s a fantastic all-around talent with the speed, length and instincts to quickly become a top-five NFL cornerback. — Miller

Why he’s here: Walker paced the rushing attack for a playoff team, breaking off 29 runs for at least 10 yards (most among rookies). Rugged between the tackles with big-play juice on the edges, Walker finished the regular season with three straight games of 100-plus yards rushing. And no other rookie came close to his nine rushing scores. — Bowen

Going forward: Seattle clearly believes in running the ball at an efficient rate, and Walker quickly established himself as the No. 1 option in the backfield. He will continue to be a big part of this offense, no matter who is starting at QB for the Seahawks next season. — Reid

Why he’s here: Like Creed Humphrey did in 2021 with the Chiefs, Linderbaum immediately anchored and improved an offensive line as a rookie center. His pass-blocking alone made him an All-Pro candidate, and his 94.7% pass block win rate led all rookie offensive linemen. — Miller

Going forward: Linderbaum was actually far more proficient in the Ravens’ run looks than he was in pass protection, as some of the more powerful defensive tackles put him on his heels too often. But he’s instinctive and tough, and he will be one of the best centers in the league. — Legwold

Why he’s here: Watson proved his ability over the final eight games of the season and is a clear building block for the Packers’ offense. He grew more comfortable in the offense as the year progressed and was a legitimate threat down the field, consistently placing stress on the third level of opposing defenses. Watson averaged 14.9 yards per catch (third among rookies), and his 6.4 yards after the catch per reception paced all first-year pass-catchers. — Reid

Going forward: The second half of the season tells us that the arrow is pointing up on Watson. With his vertical stretch ability and improved route running, the rookie will be a consistent threat to create explosive plays in the Green Bay offensive structure. — Bowen

Why he’s here: If not for a season-ending ankle injury in Week 14, Pierce likely would have led all rookies in rushing. He still finished just 111 yards behind Walker and just 61 shy of 1,000 despite being limited to 13 games. Pierce runs with toughness and vision, and there’s a lot more production to come. — Legwold

Going forward: If Pierce is healthy, he should enter 2023 as the new coaching staff’s go-to back. There were times he didn’t get as many carries as a player of his talent warrants, and that should change in his sophomore season. Plus, Pierce should have a new quarterback to work with in 2023. — Miller

Why he’s here: Purdy stepped in for an injured Jimmy Garoppolo, and the 49ers’ offense didn’t slow. He is poised and confident in the pocket, with the quick release and decision-making that allows him to produce within coach Kyle Shanahan’s system. And with more mobility than Garoppolo, the 49ers can use Purdy to attack the edges on boot play-action. His 65.3 Total QBR would have finished fifth in the NFL had it qualified. — Bowen

Going forward: Purdy is the latest passer to enter and thrive in Shanahan’s system. His decisiveness, calm demeanor and mobility have allowed that offense to unlock other dimensions, and Purdy is distributing the ball on the perimeter. His ability to diagnose and attack level concepts from the pocket has allowed Shanahan to use the entire playbook. — Reid

Ryan Clark breaks down why the 49ers are the second-best team in the NFC with Brock Purdy at quarterback.

Drake London, WR, Atlanta Falcons (No. 8 pick): He found some momentum in the Falcons’ run-heavy offense down the stretch. Over the final six contests, London averaged north of 13 yards per catch in four games and saw at least eight targets in five. He closed out the season with 120 receiving yards in Week 18. — Legwold

Jalen Pitre, S, Houston Texans (No. 37 pick): He has to clean up the missed tackles, but Pitre is consistently around the ball. He led all rookies with 147 tackles, and his five interceptions tied for second behind Woolen. — Legwold

Tyler Allgeier, RB, Atlanta Falcons (No. 151 pick): Allgeier set the team’s rookie rushing record (1,035 yards), and while he didn’t break tackles quite like Pierce did, his contact balance was evident week after week (2.6 yards after first contact per rush, tops among rookies). — Legwold

Which rookie rose throughout the course of the season?

Legwold: James Houston, OLB, Detroit Lions (No. 217 pick). He was waived by the Lions after the preseason — the team’s only 2022 draft pick not to make the roster out of camp — toiled on their practice squad and played only in the Lions’ final seven games of the season. But he had eight sacks in those seven games, including three against the Bears in Week 17. That was second among all rookies for the whole season. Houston had 16.5 sacks in his final season at Jackson State, and he flashed that kind of production to close the year.

Which first-rounder underperformed in 2022?

Miller: Evan Neal, OT, New York Giants (No. 7 pick). The 2022 first-rounders played as well as any class in memory, but if we have to pick one who disappointed a little, it’s Neal. He struggled in making the transition to right tackle, giving up 11 sacks in his rookie campaign.

Reid: Isiah Pacheco, RB, Kansas City Chiefs (No. 251 pick). A surprise contributor this season, the seventh-round pick led the Chiefs in rushing yards and touchdowns (830 yards, five TDs). He’s a determined runner who is difficult to bring down, and his vision and contact balance stand out. Pacheco is now a key part of coach Andy Reid’s offense.

Who will break out in his 2023 sophomore season?

Bowen: Jaquan Brisker, S, Chicago Bears (No. 48 pick). The Bears will likely make some upgrades to their defensive front seven this offseason, helping provide Brisker with some breakout potential going forward. He’s a top-down disruptor with multidimensional traits. And in coach Matt Eberflus’ scheme, Brisker can be deployed at all three levels to finish on the ball. As a rookie, Brisker logged 104 tackles, one interception and four sacks. Look for those numbers to jump in ’23.