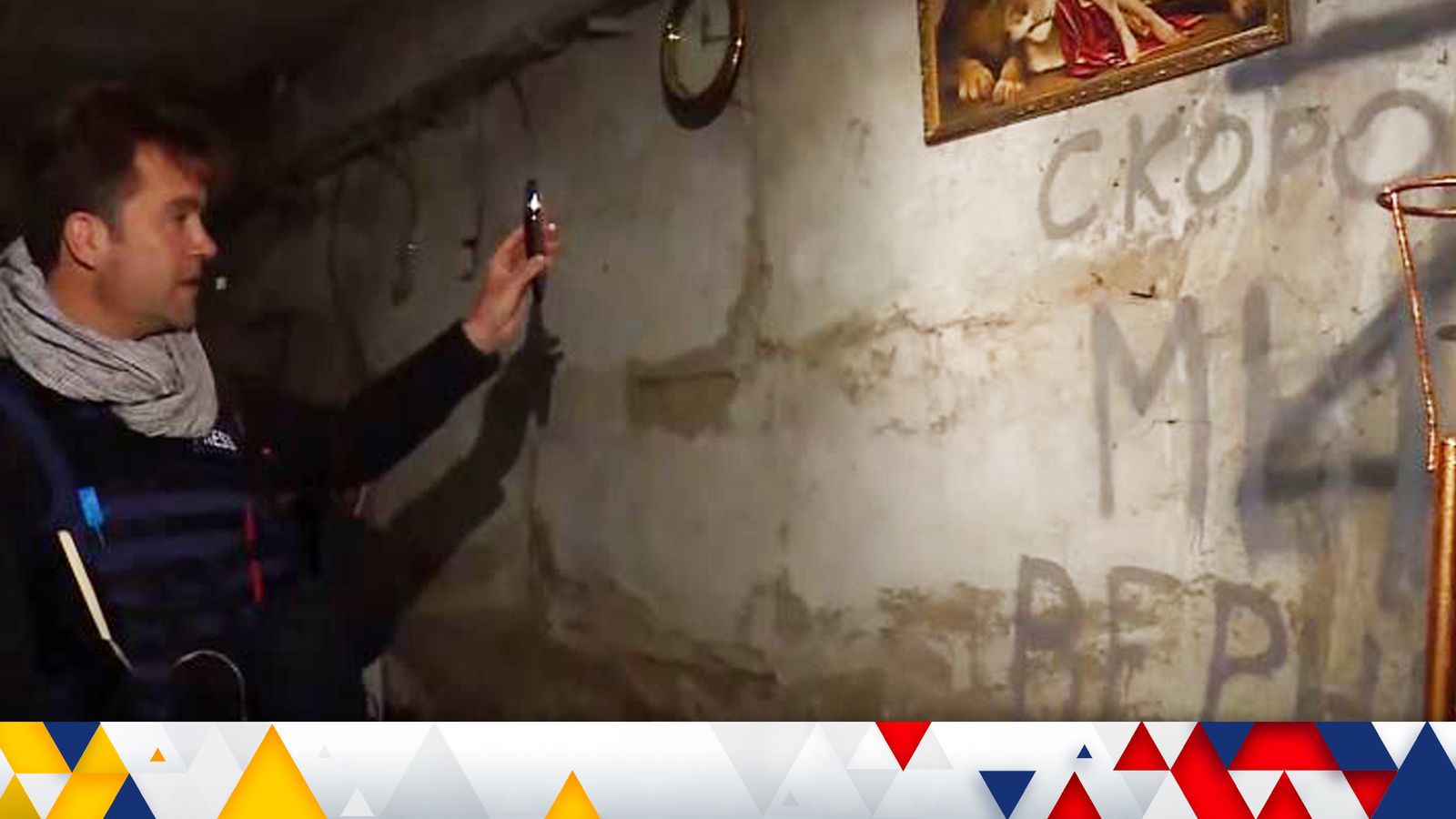 As the Russians retreat from communities in the Ukrainian region of Kherson, residents have been left with reminders of their stay.

Vast swathes of destruction afflicted places like Velyka Oleksandrivka, a quiet market town that would spend months on the frontline.

The Russians were pushed out by the Ukrainians in the first week of October, and evidence of fierce fighting is all round.

With a strategic position on the Inhulets River that was prized by both sides, its three-storey community school found itself at the heart of the battle.

The local fire chief, Volodymyr, suggested we go and have a look.

We found a headlamp and turned on our mobile phone lights, then plunged into the gloom, with the fire chief in the lead.

At the bottom of the steps, we found a chamber that was used as a bomb shelter. There was lewd graffiti and the letter Z, the symbol of Russia’s war in Ukraine, plastered on the walls.

Under the letter, Russian soldiers had proudly written the date they had occupied the town – 26.02.

We realised there was far more to this complex than a simple bomb shelter. The basement of this community school had been turned into a military base.

A dozen or more rooms had been fitted with curtains, with the ceiling and walls given a tent-like effect. It seems the soldiers were planning on staying with the subterranean complex given a homely feel.

“Everything was taken from people’s shops and houses. Curtains, carpets, pillows, they were living in here,” said Volodymyr.

How many soldiers lived down here, do you think?

We found multiple kitchens and ad-hoc dining rooms attached, and there are some items in this complex that looked surprisingly luxurious.

We found bottles of perfumes and silk bedding in one chamber.

“Is that where the officers slept?” I asked.

Members of this garrison had made a swift departure, but they left a visual warning on the walls.

“Soon we will return,” said a message spray-painted in large letters, a sinister threat left in the dark.

The battle for Velyka Oleksandrivka had been fought, in part, on the upper three floors, and we discovered the school had been turned into a fortress.

The classrooms were sandbagged, with castle-like slits, so the Russians could fire their weapons.

Bookshelves from the school library had been redeployed as blast walls, and Putin-esque world views were repeated on the walls.

A picture of Great Britain and Ireland had been defaced with the letter Z. ‘Russia’ had been painted at the bottom. It seems the Russians were not interested in learning English.

“It’s sad, isn’t it, that the school has been trashed,” I said to Volodymyr.

“Of course, it’s sad, everything is sad. We just want to win as soon as possible and start rebuilding,” he replied.

Yet the cost of rebuilding has reached an extraordinary sum – the Ukrainian government, along with the World Bank and European Union, have estimated recovery costs at approximately $350bn (£300.9bn) – and the conflict goes on.