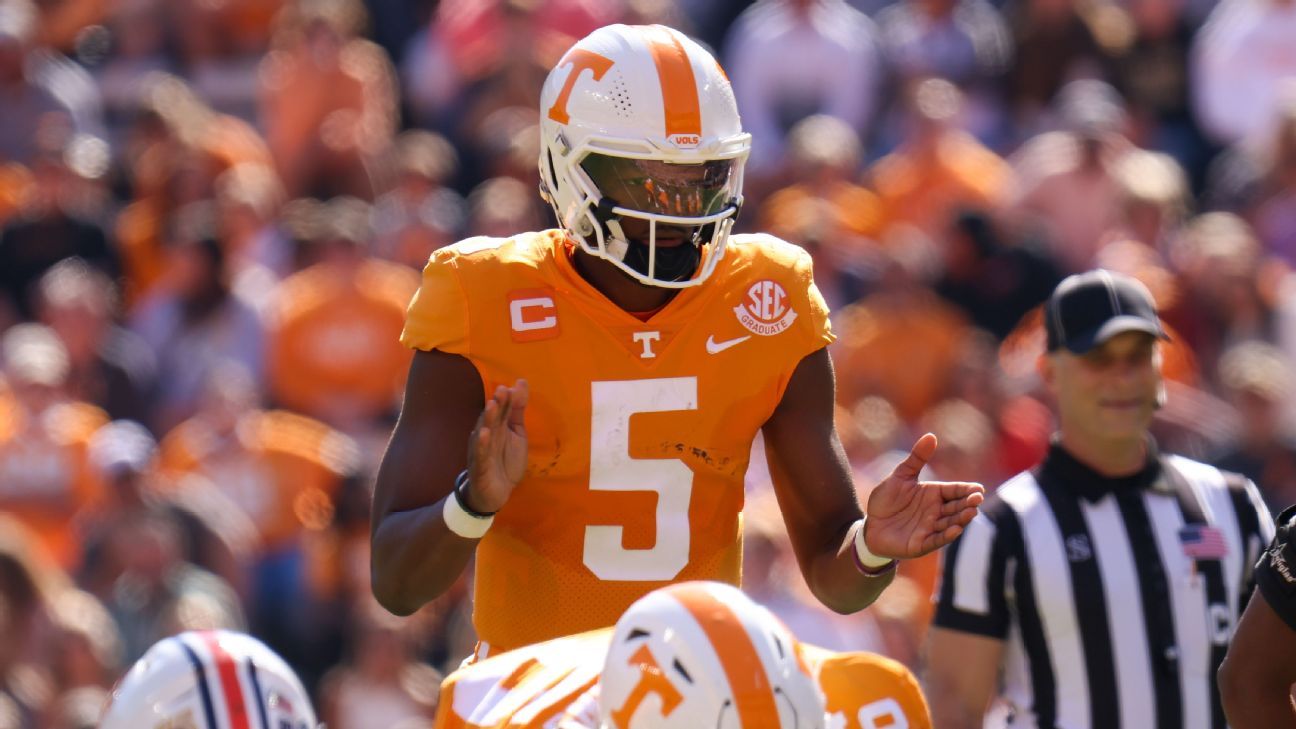 The more things change, the more they stay the same in this year’s Heisman race.

Quarterbacks Hendon Hooker (Tennessee), C.J. Stroud (Ohio State) and Bryce Young (Alabama) have all solidified their spots in the top five this season — while guiding their teams to a combined 21-1 record — but the final two spots have been a revolving door so far.

Early on it was Kansas‘ quarterback Jalon Daniels making the cut before an injury and a tough Big 12 slate slowed down his momentum. Next it was UCLA quarterback Dorian Thompson-Robinson‘s turn in the spotlight but a rough day in Eugene all but ended his Heisman campaign.

In Week 9, USC‘s Caleb Williams and Michigan‘s Blake Corum get their time to shine in the Heisman top five.

Now let’s get to this week’s Heisman standings, top Heisman moments of the week and what to watch for in this weekend’s action.

Voting methodology: 12 voters ranked their top five candidates, with five points for a first-place vote down to one point for a fifth-place vote.

Week 8 notables: It might not have matched his five-touchdown performance against Alabama, but Hooker still looked like the Heisman favorite in a 65-24 win over UT-Martin. Hooker threw for 276 yards and three touchdowns against the Skyhawks to guide the Volunteers to a 7-0 start. A test against Kentucky awaits this weekend, while a game at Georgia Nov. 5 looms large.

Week 8 notables: Stroud once again dominated a Big Ten foe through the air Saturday, this time to the tune of 286 yards and four touchdowns against an overmatched Iowa team. It was the fifth time this season that Stroud has thrown four or more touchdowns and he leads the nation with 28 touchdown passes — with North Carolina‘s Drake Maye coming in second with 24.

Week 8 notables: Young and the Crimson Tide bounced back after a tough loss against Hooker and Tennessee in a big way against Mississippi State. The 2021 Heisman trophy winner threw for 249 yards and two touchdowns while completing 21 of 35 passes in Alabama’s 30-6 win over the Bulldogs. Young isn’t the current front-runner, but if he keeps guiding the Tide to wins, expect his name to be in the mix at the end of the season.

Week 8 notables: Williams and USC had a bye in Week 8 so it’s time to look back at what he’s done in his first season with the Trojans. He currently sits at 1,971 yards and 19 touchdown passes as USC is off to a 6-1 start. He’s added three rushing touchdowns and he threw for a season-high five touchdowns his last time out in a loss at Utah.

Week 8 notables: Like Williams, Corum got to enjoy a bye in Week 8 so let’s look at his accolades this season. Corum has rushed for 901 yards and 13 touchdowns and Michigan is back in the College Football Playoff hunt. He has tallied at least one touchdown on the ground in all of the Wolverines’ seven games this season, including a season-high five rushing TDs against UConn on Sept. 17.

Our writers split this week with half the first-place votes going to Hooker and the other half to Stroud. Given the results, we asked the voters to explain why their candidate has earned Heisman frontrunner status and why one outside the top five has a chance this year.

The case for Hendon Hooker: There’s nothing like hard data to put together an unassailable argument, and the numbers tell a pretty clear-cut story in favor of Hooker as the best player in the country so far this season.

He’s completing just shy of 71% of his throws.

He’s tossed 18 touchdown passes, run for three more and has just one interception all season.

Here’s the list of other players in the past 20 years who have done that in their first seven games of the season: ERROR 404, File Not Found.

Nope, what Hooker has done so far this year is unprecedented, and that, in and of itself, is Heisman worthy.

Of course, as inarguable as the numbers may be, statistics can be a bit dispassionate. Indeed, it’s understood that the Heisman requires more than numbers. It’s about heart. It’s about narrative. It’s about a Heisman moment.

Well, who has a bigger Heisman moment this year than Hooker? Five touchdowns, 385 yards and a win over Alabama would be enough regardless, but add in the context of a 15-year losing streak against the Tide and the dramatic finish, with Alabama missing a field goal only to see Hooker connect with Bru McCoy in the final seconds of the game to set up the Vols’ winner, the celebration, the goalposts in the river … that, my friends, is as big as Heisman moments get.

There will be other signature moments in the season’s final six weeks. That’s the beauty of college football, the way it twists and turns and upends destiny just when we least expect it. But it’s hard to imagine a scenario where we reach the Heisman ceremony in New York in December, and Hooker’s win over Alabama isn’t a critical chapter in the story of the 2022 season. Add that with the stats and it’s pretty clear: Hendon Hooker is the Heisman front-runner, and it’s going to take some real magic elsewhere to unseat him. — David M. Hale

Quarterbacking this Ohio State offense, with this set of receivers, might be a pretty easy job, but he’s doing that job at a level we haven’t seen. J.T. Barrett averaged 7.0 yards per dropback in Columbus, Dwayne Haskins 7.8 and Justin Fields 8.0. Stroud? 9.5. He’s got Haskins’ accuracy (72% completion rate) and Fields’ big-play propensity (4.1 completions per game of 20-plus). He is the most productive QB we’ve seen in this Buckeye era, and it’s not particularly close. It would be absurd to think of him as anything but the Heisman front-runner.

Even if a Heisman voter somehow holds Stroud’s incredible supporting cast against him — we sometimes do that (Mac Jones) and sometimes don’t (Joe Burrow, Bryce Young) — that’s pretty unconvincing considering star receiver Jaxon Smith-Njigba has barely played this year. Leading receivers Emeka Egbuka and Marvin Harrison Jr., blue-chippers as they may be, are sophomores who came into this season with 20 career catches. They have 17 TOUCHDOWN catches in seven games this season. Stroud has been the best quarterback in the country, and Ohio State has been the nation’s best team. Making his Heisman case is awfully easy. — Bill Connelly

The case for … Max Duggan?: Max Duggan wasn’t TCU’s starting quarterback when the season began. But since taking over for an injured Chandler Morris, Duggan has done everything he can to keep the Horned Frogs rolling.

In his fourth year as a starter, he has blossomed under new coach Sonny Dykes and offensive coordinator Garrett Riley, throwing for 1,871 yards in just seven games (206 behind his career high for a season), 19 TDs (a career high and eighth nationally) with just one interception, on a Hail Mary attempt with 21 seconds left before halftime against Kansas. Duggan is completing 68.9% of his passes, ranks fifth nationally in passing efficiency (181.8) and leads the Big 12 in yards per pass attempt (9.7) along with that completion percentage, touchdowns and fewest interceptions.

“Max Duggan continues to play football as good as any quarterback I’ve been around,” Dykes said. “He just does everything he can to help your football team win.”

After coming off the bench in a season-opening win against Colorado, Duggan has led his team to six wins as the starter (averaging 303 passing yards per game in that span), including four straight wins over ranked opponents, which had never been done in TCU history. He’s also added 274 yards and four touchdowns on the ground, drawing praise from his teammates for his resilience.

“It’s crazy the shots that Max takes,” running back Kendre Miller said. “He’s a tough dude and has earned my respect just getting back up. I feel like it helps other people. If the quarterback can do it, anybody can do it.”

The Heisman is often an award given to the best player on one of the country’s best teams. There’s no doubt Duggan is as valuable to No. 7 TCU as any player is to their team in the country. — Dave Wilson

Top Heisman moments this past week

1. Not that it was totally needed in Alabama’s blowout win, but Bryce Young found a way to buy some time before throwing a dart to kick off the scoring against Mississippi State.

Bryce Young shows a glimpse of Heisman magic as he extends the play and fires a dart to JoJo Earle to put the Crimson Tide on the board.

2. With the Buckeyes already up 40-10, Stroud uncorked his best throw of the day.

3. Tennessee didn’t need much from Hooker against UT-Martin but he still delivered.

Heisman game of the week

Let’s move away from the SEC for a week and focus on the Big Ten. C.J. Stroud is currently the odds-on favorite in the Heisman race and, as seen by his stats and highlights above, rightfully so. This week Stroud and his high-profile wide receiver corps get a big test against Penn State in Happy Valley. Stroud will have his hands full with the talented Nittany Lions secondary led by Joey Porter Jr. But Stroud has typically saved his best games for the brightest lights so, look out Penn State fans.