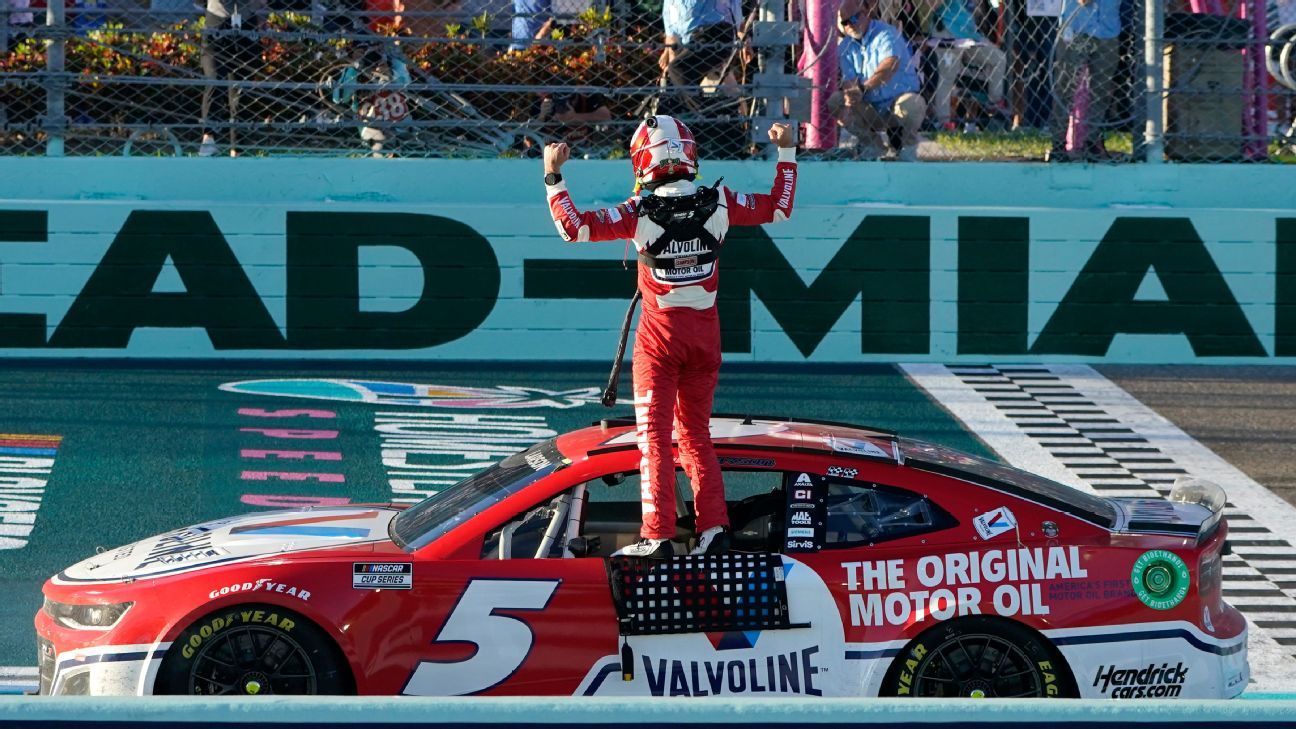 HOMESTEAD, Fla. — Kyle Larson found his way into NASCAR’s headlines for a second consecutive week. This time for a much more pleasant reason.

Larson held off Ross Chastain to cap a dominant showing in the third-to-last race of the NASCAR season at Homestead-Miami Speedway on Sunday, leading 199 of the 267 laps over the 1½-mile course before taking the checkered flag.

It was Larson’s third win of the season and came a week after the reigning Cup Series champion, who was eliminated earlier in this year’s playoffs, was intentionally spun by Bubba Wallace in an act of retaliation at Las Vegas.

On Sunday, the suspended Wallace was watching. Larson, meanwhile, was winning.

Even though Larson can’t win the title, his Hendrick Motorsports team still can and is very much in the mix for an owners championship.

“We’re still technically not out of it,” Larson said. “I can’t win the championship, but it means more to me to win it as a team. We’re going to go to Phoenix and try to get another championship.”

It wasn’t exactly close at the end; Larson beat Chastain to the line by 1.261 seconds. Chastain could have clinched a berth in the winner-take-all Phoenix race for the title if he had won at Homestead.

The four-car field for the title race will be decided next week in Martinsville, with seven drivers competing for the three remaining spots. Only Joey Logano, through his win at Las Vegas last week, has his berth clinched.

Hamlin is on the wrong side of the cut line going into Martinsville. Chastain is second, Chase Elliott is third, and Sunday’s pole sitter, William Byron, is fourth.

“It took a good part of the race to get up there and get the car turning,” Chastain said. “Incredible day on pit road by the boys.”

There will be a race within the race next week. Chastain doesn’t need to win to clinch a berth in the field for the title race, but he didn’t seem too interested in all the mathematical permutations after getting out of his car in Homestead.

Hamlin is five points back of Byron, followed by Ryan Blaney, Christopher Bell and Chase Briscoe in eighth.

Martin Truex Jr., who led 28 laps, was headed to the pits late in the race when a caution flag came out and found trouble as he got there. Larson tapped the back of Truex’s car, and Truex wound up spinning 180 degrees, ending up in his stall but with the front of his car facing in the wrong direction. It also seemed possible, given where Truex was, that he might have missed his stall entirely as the setting sun started casting serious shadows over much of Homestead.

“My team said he was late turning into his stall,” Larson said. “I don’t know. If it was my fault, I’m sorry. I don’t think it was. It’s hard to see on this pit road.”

For as bad as that moment was for Truex, it could have been much worse. His skidding car sent members of his pit crew scurrying for safety, some getting over the wall with just a split second to spare.

Briscoe — a past winner at Homestead in the Truck and Xfinity series — came into Sunday looking for a big showing that would help his playoff hopes. He didn’t make it out of stage 2. Briscoe completed only 160 laps, going into the wall and damaging his car beyond repair.

“It’s broke bad,” Briscoe said into his radio as white smoke billowed from the back of his Ford.

Briscoe’s title chances are badly damaged now as well, and his only path toward making the finale in Phoenix is to win next week at Martinsville.

He blamed himself. Driver’s mistake, he said.

“It’s like I hit ice,” Briscoe said. “Frustrating. I think that’s the first time I ever just crashed by myself. Embarrassing on that side. Of all the times for it to happen, that’s not when we needed it to happen. We know what we need to do next week now.”

NASCAR Hall of Famer Tony Stewart had been slated to serve as grand marshal for the race. Plans changed, and country singer Kip Moore, who performed a prerace concert, wound up giving the “Drivers, start your engines” command.