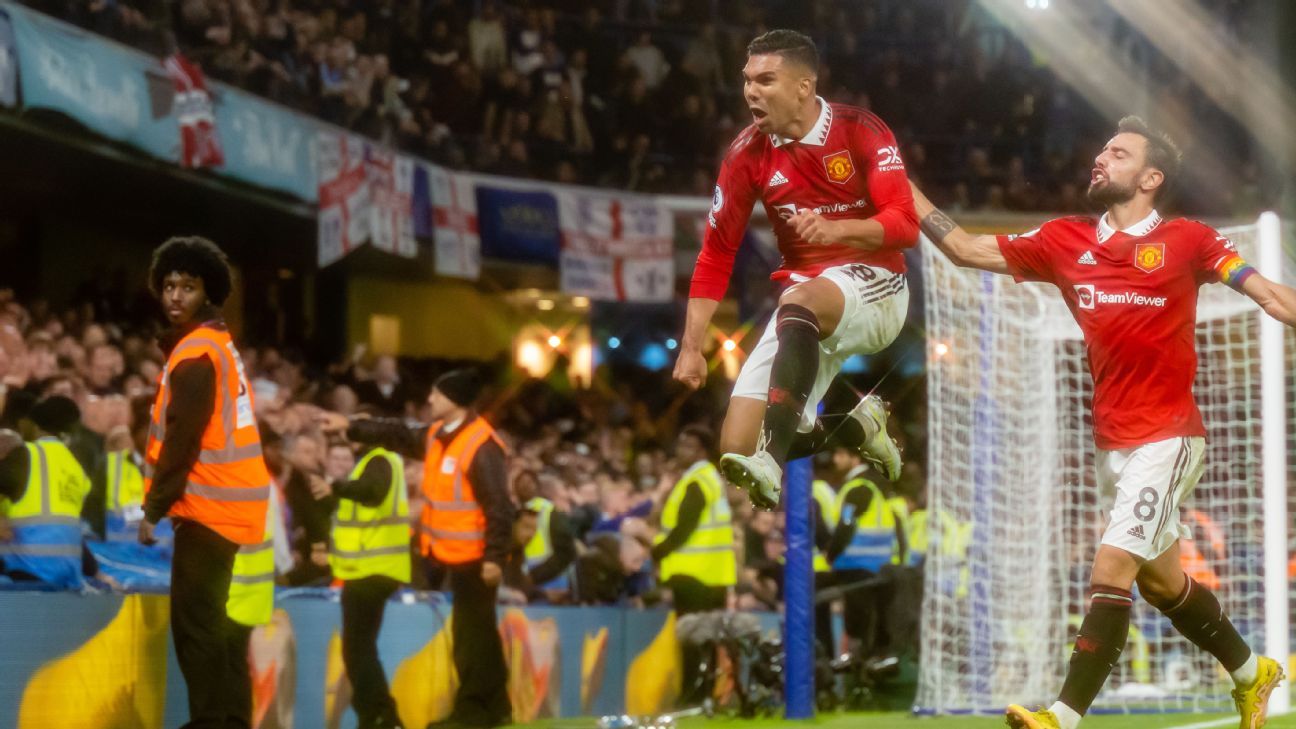 LONDON — Chelsea and Manchester United played out a tight 1-1 Premier League draw at Stamford Bridge on Saturday. Jorginho converted a penalty to put the hosts in front, only for Casemiro to eke a header over the line and end the 10-plus-hour clean-sheet streak of Kepa Arrizabalaga, and give the Red Devils a deserved share of the spoils.

It’s as you were for the two clubs in the table, with the Blues occupying fourth place, one point ahead of United in fifth.

1. Casemiro snatches point for United in dramatic finish at Chelsea

Casemiro scored his first goal for Manchester United with a dramatic headed equaliser four minutes into stoppage time against Chelsea at Stamford Bridge.

Jorginho’s 87th-minute penalty, following a needless foul by Scott McTominay on Armando Broja, looked to have given Chelsea a victory that their performance barely deserved. But Brazil international Casemiro, a £70 million summer signing from Real Madrid, salvaged a point for United by beating McTominay to a cross and heading the ball past goalkeeper Kepa, who had pushed it onto the post.

Kepa scrambled to try to keep the ball out of the net, but the goal was given after the Hawk-Eye system confirmed it had narrowly crossed the line.

United had dominated the chances and possession at Stamford Bridge, with Marcus Rashford and Antony wasting clear opportunities to score, but Jorginho looked to have sent them to a fourth league defeat of the season when he sent goalkeeper David De Gea the wrong way from the spot. McTominay had foolishly wrestled Broja to the ground in front of referee Stuart Attwell, leaving the official with no option but to award a penalty.

It compounded a bad day for United, who lost defender Raphael Varane to what appeared to be a worrying injury in the second half. United had also travelled to Stamford Bridge without Cristiano Ronaldo, who had been dropped by manager Erik ten Hag for refusing to go on as a substitute in Wednesday’s 2-0 home win against Tottenham.

Just as the game looked to be lost, though, Casemiro claimed a deserved point with his late header.

There is an old maxim that football teams are a reflection of their manager’s personality and, despite only being in charge of Manchester United since the summer, Ten Hag’s toughness and abrasiveness is already rubbing off on his players.

Last season, and repeatedly since Sir Alex Ferguson retired in 2013, United have been a touch soft on the pitch with opponents too often winning the physical battle over the 90 minutes. But Ten Hag is clearly a spiky character and the players he has added to the squad since taking charge have given United the physical edge they have lacked for too long. Casemiro, Antony and Lisandro Martinez all displayed a hard edge against Chelsea, at times going too far in challenges against their opponents.

Antony, who played for Ten Hag at Ajax Amsterdam, was booked for a foul on Jorginho in the first half, while Martinez was involved in a scuffle with Mason Mount following a late challenge by the Chelsea player. And Casemiro showed his experience with a series of tactical fouls that helped halt Chelsea attacks.

It is not the side of the game that many fans celebrate, but United have lacked steel for years and Ten Hag has put it back into the team.

The confirmation this week that N’Golo Kante’s hamstring injury will now sideline the France international for four months was a hammer blow to Chelsea because of their lack of depth in midfield.

Against United, Jorginho and Ruben Loftus-Cheek struggled to make any impact in the centre of the pitch. Manager Graham Potter had to tweak his formation in the first half, replacing Marc Cucurella with Mateo Kovacic after just 36 minutes, in an effort to give his team the extra legs required to stem the red tide.

The six-week World Cup shutdown will help Chelsea as it will reduce the amount of time they will be short in midfield, but their problems will not disappear without new players being signed.

Kante and Jorginho are both in their 30s and Kovacic, at 28, is arguably beyond the peak of his career. The lack of energy in Chelsea’s midfield is a consequence of the workload all three have had during their careers. Conor Gallagher has been brought back to Stamford Bridge after an impressive spell on loan at Crystal Palace last season, but he isn’t the answer to Chelsea’s midfield issues, so they will need to find a solution outside the club.

BEST: Trevoh Chalobah, Chelsea. The Chelsea defender was tasked with keeping Rashford quiet and he did it so well that United substituted the England forward midway through the second half. Rashford was ineffective, but Chalobah was a big reason for that.

WORST: Raheem Sterling, Chelsea. Chelsea’s star signing of the summer has blown hot and cold since arriving from Manchester City, and he was pretty much subzero against United. Sterling shone with top quality around him at City, but he’s finding it tougher to shine as the main man at Chelsea.

Not much from this one could be qualified as a “highlight.” There was this lowlight, though.

Raphael Varane was in tears as he came off injured 💔

The World Cup is a month away… pic.twitter.com/KVqmRcFWOq

After the match: What the managers, players said

Fernandes on the penalty awarded to Chelsea: “I said to the referee that in the Premier League this kind of contact is every game. I didn’t see it, I can’t say if it was right or not. [McTominay] said he was not holding him. I don’t know.”

Potter: “I can’t stand here and say we deserved to win. The two teams had a go and a point is about right.”

– Before Casemiro’s equaliser in the fourth minute of second-half stoppage time, it had been 623 minutes since Kepa conceded a goal.

– At the other end of the pitch, the penalty converted by Jorginho was the first goal conceded by David De Gea in 442 minutes.

Chelsea: Chelsea will next be in action on Tuesday for a Champions League group stage match in Austria against FC Salzburg, before returning to Premier League play on Saturday at Brighton & Hove Albion.

Manchester United: United will welcome Sheriff Tiraspol to Old Trafford on Thursday for a Europa League group stage contest, with another home game waiting on Sunday, when they’ll host West Ham United in the Premier League.