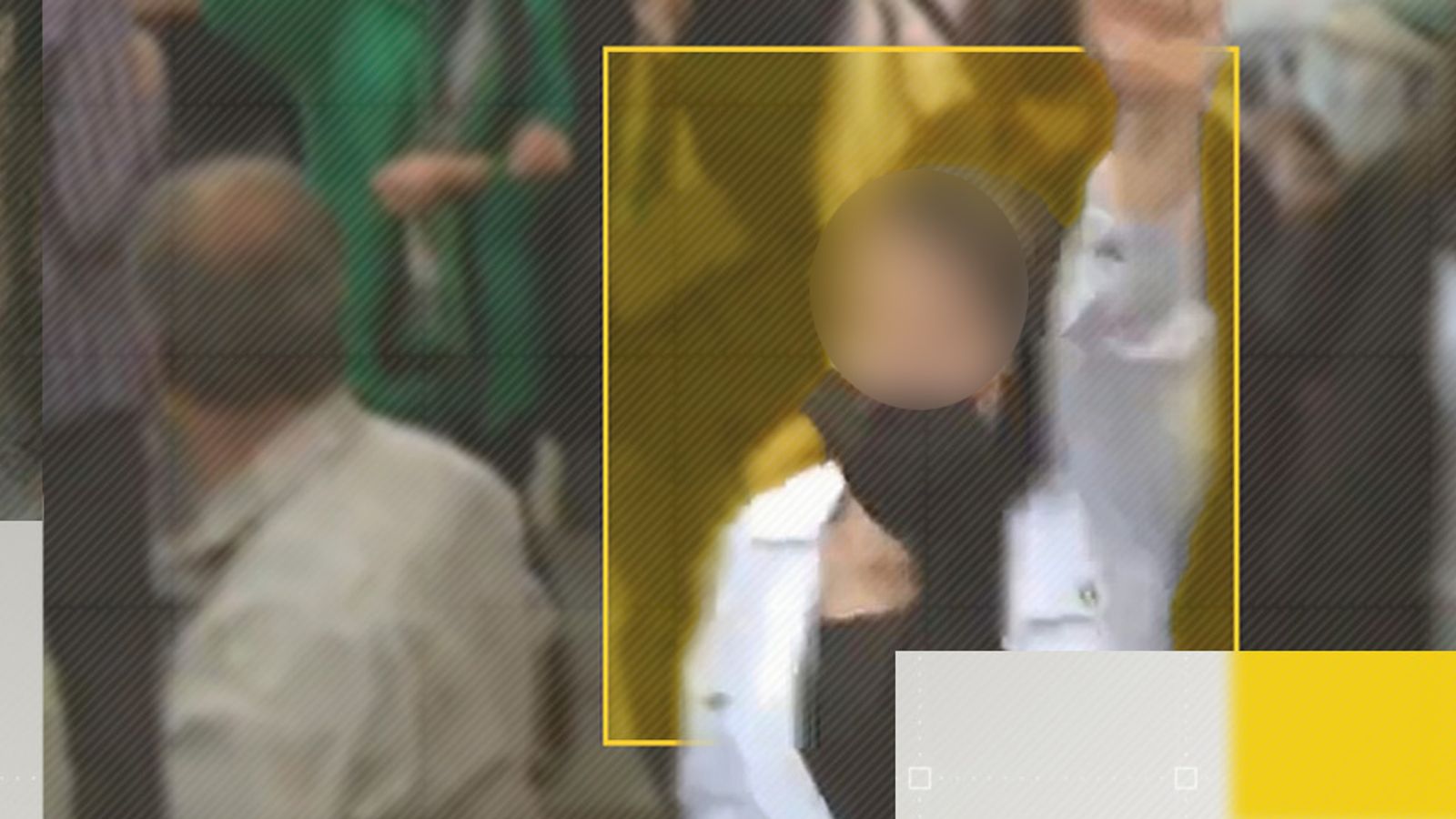 She has now been arrested twice by Iranian forces for taking part in the protests sweeping her country.

Speaking to Sky News through voice notes sent on an encrypted messaging app, she spoke about her experience and why she is prepared to risk her life to help secure change in Iran. We have changed her name and withheld some details to protect her identity.

“Our whole life has changed,” she says.

Before the death of Mahsa Amini in mid-September, Mina – an academic in her early 30s – was focused on her PhD studies in the Kurdish region of Iran.

Now, she says the daily lives of Iranian and Kurdish Iranians have been transformed by the constant protests triggered by the young woman’s death.

Usually, Mina would be studying in the library and hanging out with friends. Instead, a few days ago, she was detained and confined in a solitary cell by the regime’s intelligence office.

More on Data And Forensics

“This is a place where detainees are not transferred into the justice system. They undergo beatings and torture,” she explains.

The torture is sometimes physical, mental or a combination of the two. Mina is too afraid to describe what happened to her in her voice messages to us.

Two of her female friends were recently released from the juvenile detention centre in Sanandaj, the capital of the Kurdish region.

Mina describes their experiences: “When women’s rights activists are detained, they [the police] don’t attack you physically.

“Instead [the police] threaten, intimidate and try to frighten them. They insult people’s beliefs. It is an intense psychological violence.

“That woman’s future is then also targeted. They can make the woman lose her job and make her life difficult. This creates crippling fear.”

Mina has also been detained – she says illegally – during previous protests, facing interrogations and the seizure of her her laptop and mobile phone.

Now she has a lawyer who was able to help her escape detention this time and pay bail.

After being held in a cell, Mina was taken to a building she describes as a house. She was held there once again in solitary confinement before her recent release.

Mina believes the authorities have arrested so many people that they have run out of cells to hold them.

She knows of two other student protesters who were also not held in a traditional cell.

“They were held for a week in a huge basement full of protesters. They told me that they were beaten by cables and iron sticks.

“The jails are full of prisoners so now they use houses and basements to detain protesters.”

The threat of loss of life is considerable. An estimated 244 protesters have died, including 32 children, according to the Human Rights Activists News Agency in Iran.

“When we speak about fear for life, every person in this movement fears for their own lives and the lives of their fellow protesters,” she says, reflecting on the events of the current and past protests.

“We see guns firing in front of us.

“We have woken in the night shocked out of sleep at the sound of bullets, sirens and the smell of gunpowder and burning on the streets.

“We see how many people are being killed so the fear of losing one’s life still exists.”

Protesters who survive have other fears.

“Many of us are concerned about what is going to happen and about the heavy price we have paid inside the country because of the protests and strikes.

“We are also afraid of the hope we have pinned on change.

“Our fear and concern is that this hope will be lost or crushed.”

Much of the news coverage of the protests has focussed on Tehran, the capital of Iran.

But some of the biggest protests have happened in the Kurdish region of Iran, an area that both Mina and Amini call – or used to call – home.

Tensions have been particularly high there. A recent Sky News investigation tracked the intensifying crackdown being carried out by Iran’s security forces against the Iranian Kurds.

Verified videos online show police roving the streets on motorbikes and firing onto civilians. Plains clothes officers lurk among them in crowds. Tear gas canisters and bullet cases can be found on the floor, as seen in this video provides by human rights group Amnesty International.

One video, shakily filmed from a window in Sanandaj, shows security forces patrolling and firing on a residential street, with a fire burning behind them. Some of the men are heavily armed and nearly all have their faces obscured as they appear to shoot at local shops and people’s homes.

Mina fears that the brutal tactics of the police have ground down some protesters.

“I think these protests will continue but maybe not with the intensity of the first days and weeks, partly because the crackdown has intensified.

“But, I think some people will continue despite that.”

Iranian Kurds have been protesting since Amini’s death, with videos showing huge crowds at her funeral on 17 September.

Mina remembers the worry she and those around her felt for the 22-year-old, who was killed after being detained by officials who claimed she wore her hijab (head covering) “improperly”.

Throughout our interview Mina calls Amini by her true, Kurdish name: Jina. Under Iranian convention, many Kurdish names are not allowed and so instead Amini has become widely known by her Iranian name – Mahsa.

“Yes, the current protest started with the death of Jina but this is about institutional violence against all the people and all the individuals living in this society,” she explains.

She gives an example of how the regime’s restrictions on women have a direct impact on that person’s family.

In 2009, Mina was taken to the notorious Vozara Street, home to the morality police’s detention centre.

She explains: “The families become involved because they are summoned too. They insult them, they call them without honour. They say these things to husband, to brother, mother and father.”

The protesters on the streets of Iran are also demanding action on a number of economic, social and environmental issues.

What does Mina hope will come from these protests, that previous demonstrations have been unable to achieve?

“The hope and desire is that a fundamental change will come,” she says.

Mina admits change may not happen now, or perhaps ever, but believes the fact protests have continued in the face of militaristic policing shows the seed of anger that formed when Amini died has grown roots and is now anchored in the Iranian people.

“I and many other people have concluded that maybe it is true that change will not happen right now but in the coming months or years, it will achieve the result people want.

“So hopefulness is greater than hopelessness. We will continue.”

The Data and Forensics team is a multi-skilled unit dedicated to providing transparent journalism from Sky News. We gather, analyse and visualise data to tell data-driven stories. We combine traditional reporting skills with advanced analysis of satellite images, social media and other open source information. Through multimedia storytelling we aim to better explain the world while also showing how our journalism is done.

See moment man who went overboard cruise ship was spotted
Alaska oil and gas lease sale is on because Joe Manchin insisted
NASA rover discovery reveals there may have been life on Mars
What’s being done about ‘murder-for-hire’ sites on the dark web, and how dangerous are they?
Mortgage approvals dive in the wake of Truss mini-budget chaos