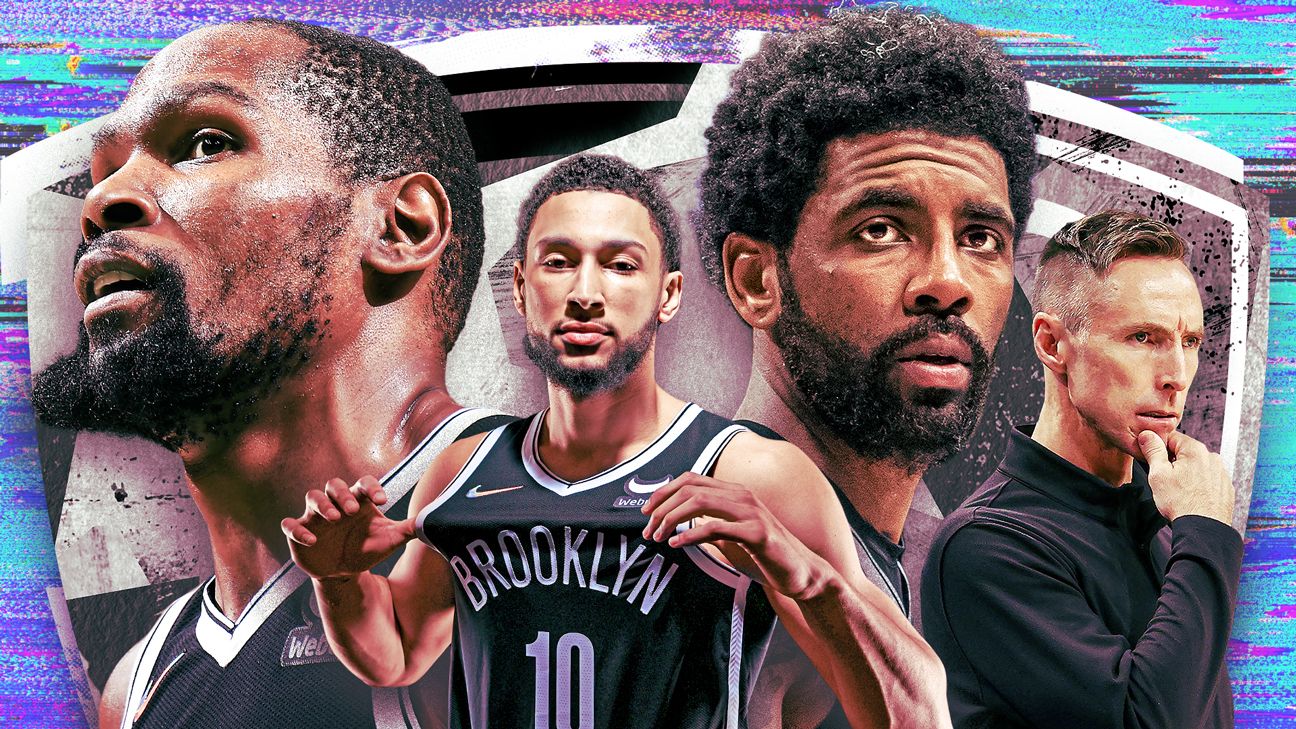 The Brooklyn Nets gave the NBA offseason extended life. Every move the organization made — and didn’t — was examined; every whisper, every tweet broken down to the syllable as the league watched the turmoil unfold throughout the summer.

Kevin Durant, who on June 30 requested a trade, then requested for general manager Sean Marks and head coach Steve Nash to be fired, now appears ready to start the season with the Nets.

The roller coaster continued, as guard Kyrie Irving dealt with questions about his own future in Brooklyn. While speculation about a potential reunion with LeBron James and the Los Angeles Lakers took up the first week of free agency, no deal materialized.

Irving, who played just 29 games last season because of his vaccination status and New York City’s mandate, could not come to terms with the Nets on an extension, announcing June 27 his decision to opt in to final year in his contract, a player option worth $36.5 million.

Meanwhile, Ben Simmons, who was acquired just before February’s trade deadline from the Philadelphia 76ers, hasn’t played in over 16 months. After arriving in Brooklyn, Simmons missed the rest of the year while dealing with mental health concerns and a back injury that ultimately forced him to have surgery over the summer.

As the Nets head into their preseason opener Monday against the 76ers, they appear to be on the same page for the first time in years.

Here are the five biggest questions surrounding the Nets heading into the 2022-23 season:

1. How will Durant respond to the Nets’ summer of discontent?

Durant made clear after getting swept by the Boston Celtics in the first round last season that he had “no regrets” about the way the year unfolded. “No time to feel regret or be too pissed off. It’s about how we can find solutions to get better, proactive as an organization to get better,” he said in April.

What a difference a few months can make.

As Durant vented frustration about last season and the way he believed some players weren’t being held accountable, he outlined exactly what he wanted to see moving forward after internal conversations within the organization.

“It’s just a matter of team building,” Durant said. “… I just felt like that’s what great teams do. I feel like we don’t have any respect out there on the court, and that’s what I want for us. Respect amongst the NBA community as a team on how we play on both ends of the floor from GM [Marks] all the way down to the equipment manager.

“I want that respect. I think you [get that] by how you work every single day and we skipped some steps in how we worked throughout that year last year because of the circumstances — vaccine mandates, people disgruntled, injuries. I felt like we could have just kept pressing forward, and that’s what I try to do as a player. I’m not preaching something that I don’t practice. I come in here, every rep matters to me, so I want everybody to feel the same way.”

Since he signed with Brooklyn over three years ago, the organization has put Durant at the center of everything it does. That likely won’t change now, either — but how he approaches each day, with a team that mere weeks ago he appeared to not want to be on anymore, will set the tone for everything else that happens this season.

2. Will Irving be a fully committed member of the team?

Irving’s decision not to get vaccinated last season hung over everything.

During the 2020-21 season, he took a leave of absence for personal reasons and was away from the team for two weeks. The hope within the organization, team sources said, is that without a vaccination requirement this season, and with the motivation of a potential contract extension hanging in the balance, Irving will rebound. 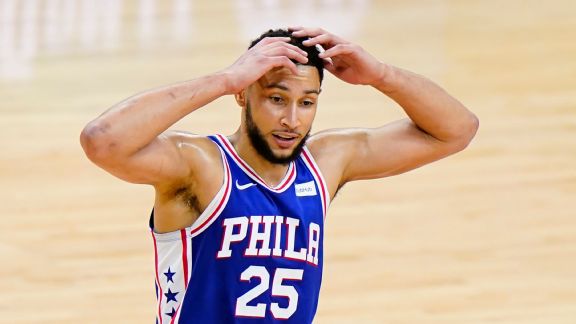 After holding out for the first four months of the season, the All-Star guard is on his way to Brooklyn.

Shelburne: What haunts the 76ers
• Timeline: All the Simmons happenings

“That first year he played more games than me and James [Harden],” Durant said at Nets media day on Monday. “So you can say he was more reliable than us that first year. And last year if it wasn’t for the vaccine he would have played. There’s not a vaccine mandate this year. The year I played with him before he was very reliable, so once the mandate was gone I figured he’s going to be here every day. And he loves to play. I shouldn’t even have to say that. We all know that.”

When Irving is on the floor, he has shown he can still play at a high level, as evidenced by the 27.4 points he averaged over 29 regular-season games last year. but he has also shown, at times, that he can’t be counted on. “He understands that in order for him to be a free agent and get what he rightfully wants,” Marks said, “he’s going to have to show commitment out there.”

3. Is Ben Simmons ready to play?

While the Durant and Irving storylines drove most of the headlines the past few months, Simmons’ reemergence is arguably the team’s most critical variable if the Nets want to contend in the East.

Simmons hasn’t played one minute of professional basketball since the Philadelphia 76ers’ Game 7 loss against the Atlanta Hawks in the 2021 Eastern Conference semifinals in which the point guard took a heap of criticism from the public and his own teammates for his passive play.

Simmons was traded to the Nets the following season and after offseason back surgery and missing time last season to address his mental health, he must show he is still capable of playing at an All-Star level — and has to learn to play with a new team. For his part, Simmons said he is confident that both his body and mind will hold up all season.

“I’m glad I got it done,” Simmons said of the back surgery. “It was much needed. I don’t think people really realize where I was at. That day I was supposed to play Game 4 [of the 2021 Eastern Conference semifinals], I woke up on the floor, I couldn’t move. I could barely walk. So I’m glad to be in this position, this situation. Rehabbed myself and got myself into a place where I can compete. So I’m excited.”

Stephen A. Smith takes issue with Kyrie Irving’s lack of commitment to the teams he plays for.

How he fits alongside Durant and Irving is one of the most intriguing questions in the league. How he handles adversity is just as important. Simmons was quick with a response when asked what it has been like practicing with both players over the past week.

4. How does Nash respond?

In the midst of a season-long 11-game losing streak in February, Steve Nash came into a training room after a shootaround in Salt Lake City and started to describe how the team would break it. He referenced how he’d carved out a career by finding a way through whatever obstacles appeared in his path — notably as an undersized guard out of Santa Clara University, far off the NBA map. “I love this s—,” Nash said with a smile.

Nash has spent his professional life inside the NBA. He understands the scrutiny that can boil when losses mount and things go haywire — but he also earned a Hall of Fame induction and two MVP awards during 18 seasons in the league.

“That’s pro sports, right?” Marks said, when asked about Durant’s offseason request that he and Nash both be fired. “I’m sure there are plenty of things that go on behind the scenes. [Nash and I] both lived on both sides of that locker room as well, so we know what happens inside the locker room, and that’s completely fair …

“I totally understand [Durant’s] frustration. I don’t know if there was anybody more frustrated than the two of us. We’re all in on this. We all know what’s at stake here, what our ultimate goal is.”

5. What are the Nets going to do at center?

Nic Claxton is the only center currently on the roster who played rotational minutes (18.7 per game) last season. One much-talked-about option would be to use Simmons at the 5, where he played just 8% of the time in his four seasons in Philadelphia, per NBA Advanced Stats. Nash acknowledged this week that Simmons at center will happen.

“If he’s the quote, unquote ‘lone big,’ that’s a role we would definitely play him at,” Nash said. “But he’s also our playmaker and point guard.”

While Simmons at center is the headline, Nash noted that second-year big man Day’Ron Sharpe will have opportunities as well. After losing LaMarcus Aldridge, Blake Griffin and Andre Drummond, Nash’s choices are limited — an issue perhaps best summed up by new addition Markieff Morris.

Nash said the 13-year veteran “is a 5 for us.” While discussing his role a few minutes later, Morris said he was open to helping the team in whichever way he can but added:

“I wouldn’t call myself a center. But if you want to put me there, Steve wants to call me a center, I’m a center.”