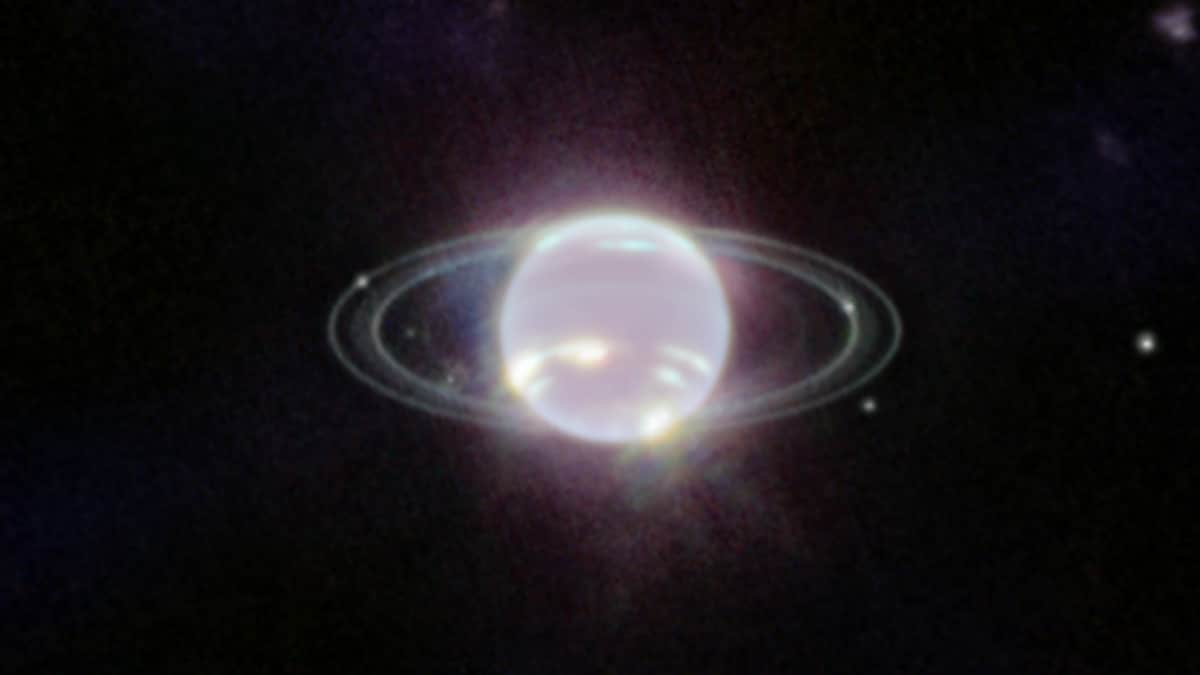 The James Webb Space Telescope has captured its first image of Neptune, revealing the clearest view of the distant planet’s rings in more than 30 years, NASA said. The most striking feature in the image is the crisp view of the planet’s rings — some of which have not been detected since NASA’s Voyager 2 became the first spacecraft to observe Neptune during its flyby in 1989, the US space agency said.

“It has been three decades since we last saw these faint, dusty rings, and this is the first time we have seen them in the infrared,” Heidi Hammel, a Neptune system expert and interdisciplinary scientist for Webb said in a statement.

Neptune is located 30 times farther from the Sun than Earth, and orbits in the remote, dark region of the outer solar system.

The planet is characterised as an ice giant due to the chemical make-up of its interior. Compared to the gas giants, Jupiter and Saturn, Neptune is much richer in elements heavier than hydrogen and helium.

This is readily apparent in Neptune’s signature blue appearance in Hubble Space Telescope images at visible wavelengths, caused by small amounts of gaseous methane. Webb’s Near-Infrared Camera (NIRCam) images objects in the near-infrared range from 0.6 to 5 microns, so Neptune does not appear blue to the telescope.

The methane gas so strongly absorbs red and infrared light that the planet is quite dark at these near-infrared wavelengths, except where high-altitude clouds are present, the researchers said.

Images from other observatories, including the Hubble Space Telescope and the W.M. Keck Observatory, have recorded these rapidly evolving cloud features over the years.

A thin line of brightness circling the planet’s equator could be a visual signature of global atmospheric circulation that powers Neptune’s winds and storms, according to NASA.

The atmosphere descends and warms at the equator, and thus glows at infrared wavelengths more than the surrounding, cooler gases, it said. A previously-known vortex at the southern pole is evident in Webb’s view, but for the first time Webb has revealed a continuous band of high-latitude clouds surrounding it.

Buying an affordable 5G smartphone today usually means you will end up paying a “5G tax”. What does that mean for those looking to get access to 5G networks as soon as they launch? Find out on this week’s episode. Orbital is available on Spotify, Gaana, JioSaavn, Google Podcasts, Apple Podcasts, Amazon Music and wherever you get your podcasts.
This article was originally published by Gadgets360.com. Read the original article here.

NASA’s Artemis 1 Launch Faces Another Obstacle, Next Launch Window in October
Truss is a ‘danger’ to the economy and has ‘lost control’, says Starmer
Why the airline climate change, sustainable jet fuel plan is trailing autos and EVs
Plan to cut taxes for richest is ‘breathtaking in its audacity’, says Steve Coogan
Elon Musk Deploys Starlink Service in Iran Amid Country-Wide Internet Restrictions