Today marks the final full day of the Queen’s lying in state.

Thousands of people are still joining the queue to pay their respects, as heads of state continue to arrive in London ahead of Monday’s funeral, with the estimated queuing time at least 12 hours.

Foreign dignitaries have been arriving in their droves over the last few days, ahead of tomorrow’s ceremony. 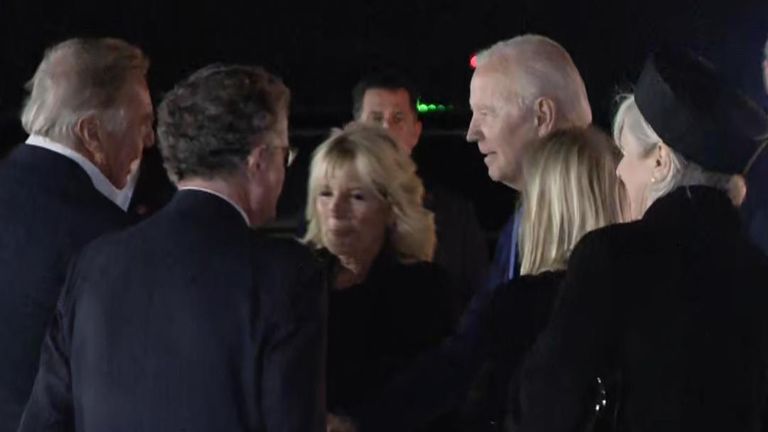 Joe Biden and his wife, Jill, who arrived in the UK on Saturday night, are expected to pay tribute at the Queen’s coffin in Westminster Hall today.

New Prime Minister Liz Truss had been due to meet Mr Biden today too, however the meeting was cancelled and the pair will instead attend a “full bilateral meeting” at the UN General Assembly on Wednesday, No 10 has said. The Queen’s grandchildren have held a vigil around her coffin – with Prince Harry wearing military uniform at the King’s request.

Irish president Michael D Higgins and Taoiseach Micheal Martin are also expected to join those who have signed an official book of condolence at Lancaster House in central London.

The King will hold an audience with Ms Truss at Buckingham Palace before he and the Queen Consort host overseas dignitaries there later, in what is described as an “official state event”.

Queen’s grandchildren stand vigil around her coffin; funeral to be shown on big screens across UK – all latest news, live

A service of reflection for the Queen at the Kelpies sculptures near Falkirk, Scotland, will see 96 lanterns, one for each year of Her Majesty’s life, being lowered into the pool of reflection at the foot of the Queen Elizabeth II Canal, before wreaths are placed into the water.

In pictures: The Queen through the years – a life of public service In this exert of an interview to be aired before the Queen’s funeral, Camilla pays tribute to the Queen.

A pre-recorded tribute to the late monarch by the Queen Consort will be broadcast on the BBC shortly before 8pm.

In it, Camilla will speak of the Queen being a a “solitary woman” in a male-dominated world, and also recall her “wonderful blue eyes” and “smile”.

After it, members of the public will be invited to observe a one-minute silence to remember the Queen.

The lying in state period will end at 6.30am on Monday, which will be a national bank holiday to allow as many people as possible to watch the Queen’s funeral. 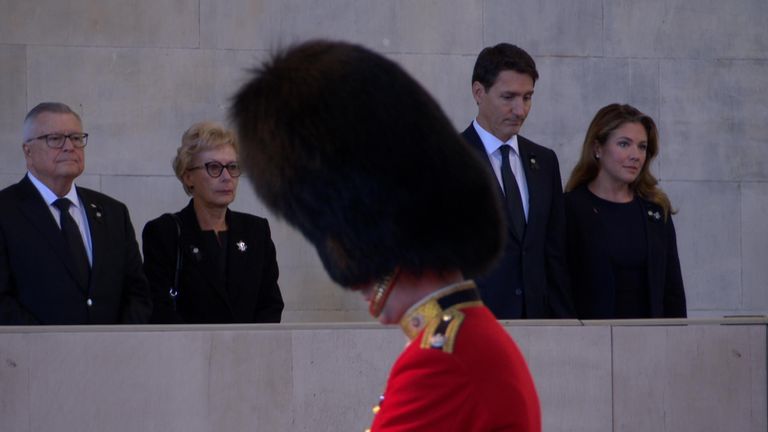 The prime minister of Canada is among leaders from across the world arriving in London ahead of the Queen’s funeral.

It will be shown on big screens across the UK, including at Hyde Park in London; Centenary Square in Birmingham; Coleraine Town Hall in County Londonderry, Northern Ireland and Holyrood Park in Edinburgh.

It will also be broadcast live at around 125 cinemas and several cathedrals throughout the UK – along with Sky News, ITV and the BBC screening the event for people at home.

At Westminster Abbey, final preparations are being put in place ready for tomorrow’s ceremony.

The state funeral will mark the final of a series of carefully-choreographed events which have taken place over the 10 days following Queen Elizabeth’s death, reflecting the traditions and pageantry of the British royal family whose lineage stretches back almost 1,000 years.