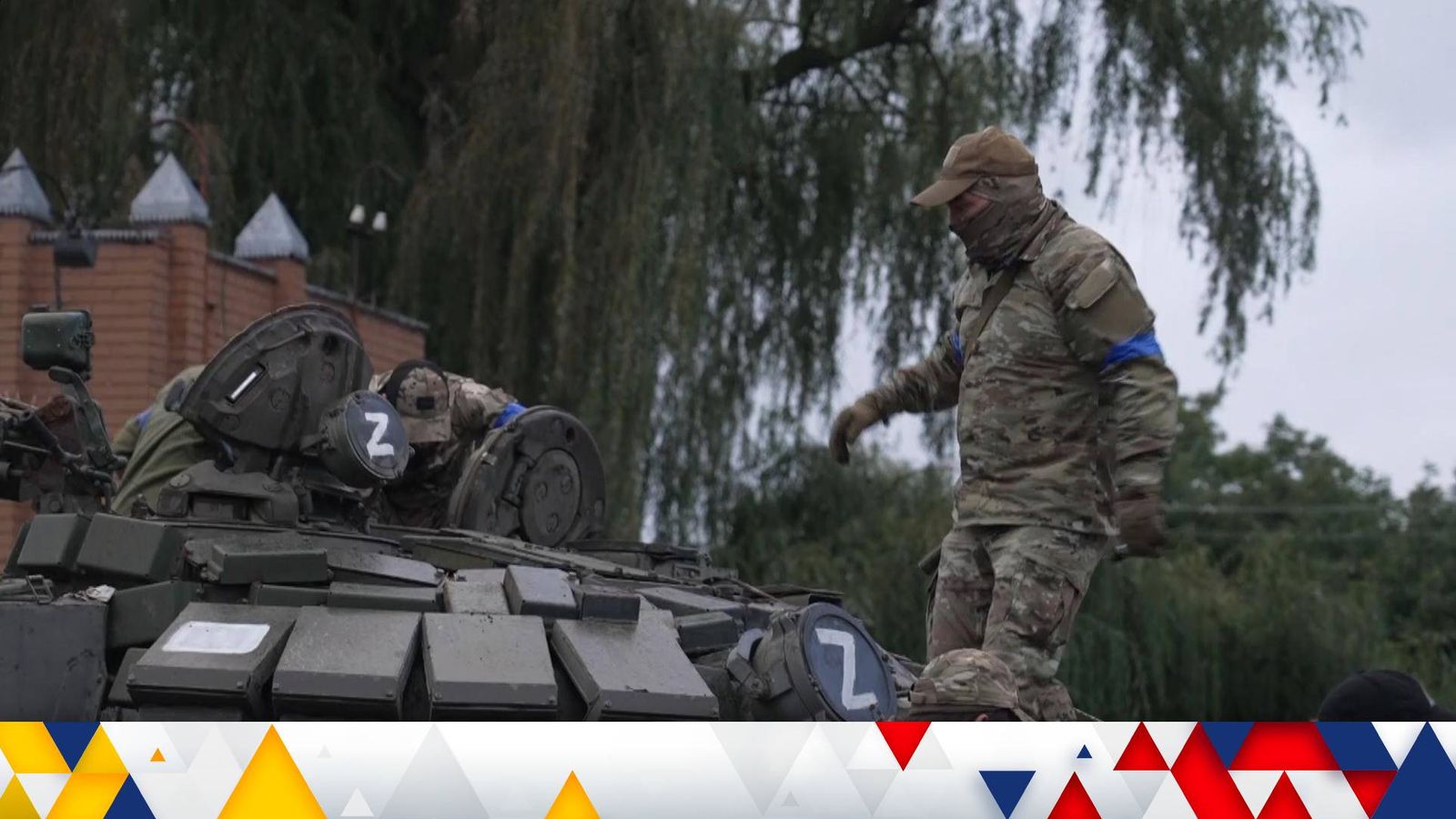 The Ukrainian soldier stooped over an ammunition box and picked up what looked like a giant, metal cork. ”Russian landmine,” he said.

He walked to another discarded crate inside a large warehouse.

“This is a mortar,” the serviceman, 39, said, holding up the deadly weapon, which was the shape of a stretched, grey-coloured balloon.

The haul was part of a stockpile of ammunition found at a sprawling, mud-splattered repair yard, which Russian soldiers had apparently used as a base on the edge of the Ukrainian city of Izyum.

It had been left behind, along with shabby-looking bits of body armour, boots and jars of food – signs of a hasty Russian retreat in the face of a Ukrainian offensive to take the city back.

The soldier – who went by the name Granitsya, the call-sign he said he used for the war – was part of the operation.

“They just ran away,” he said, describing the advance, launched last week. “There was small arms fire but not the big combat that we saw in the first days or months of the invasion.”

Sky News met the volunteer soldier as he stood next to an abandoned Russian tank on a street leading further into Izyum.

Asked how he felt before the operation to attack Russian positions across the Kharkiv region started, he said: “I wasn’t scared because of what they did to our country. They killed our women, our children, there is no fear. It is only hatred and a desire to tear them apart.

“We are a special unit – Kraken – everyone knows us. We are working to defend our country.”

The Kraken Regiment is a relatively well-known group of military volunteers within the Ukrainian armed forces.

Behind him, members of his unit were climbing over the top of the discarded tank, making sure it was safe. The vehicle will be given a wartime makeover, effectively switching sides.

Granitsya took Sky News to the nearby repair yard.

Inside one enormous hanger, were two Russian military trucks. At least one had the tell-tale letter ‘Z’ daubed in white paint on a door.

His side appeared to have been aware. A giant hole in the roof marked the point where a projectile looked to have struck the site, presumably as part of Ukraine’s offensive.

Pock marks caused by shrapnel dented the walls and twisted pieces of metal littered the floor.

On another part of the compound, inside a dingy, unlit cluster of makeshift rooms, was where the Russians slept and ate, according to Granitsya. “Russian, Russian, Russian,” he said, pointing to a heap of shabby green body armour and dirty boots.

There was also a long box containing jars of what could have been pickles.

‘There is no one to fear them’

Stepping back outside, he exclaimed again: “Russian”, picking up parts of a rusty gun that he said had been fitted to a vehicle.

Granitsya had been a full-time soldier fighting in eastern Ukraine between 2017 and 2020, following Russia’s first invasion in 2014.

He had decided to leave the armed forces but joined the Kraken unit on 24 February after President Vladimir Putin launched his full-scale war.

The soldier was scathing about the quality of the Russian military. “Their army is not big and powerful,” he said.

“It is a big fake. They create this fake [impression of strength] to make other countries afraid. But in reality there is no one to fear them.”

Google adds new search features to try to give users the ‘vibe’ of a city or neighborhood
No calm after the storm as Floridians scramble for basics after Hurricane Ian
Hurricane Ian regains strength and barrels north – leaving Florida devastated in its wake
Tesla delivered 343,000 vehicles in the third quarter of 2022
77 killed and many are unaccounted for after one of strongest, costliest hurricanes in US history