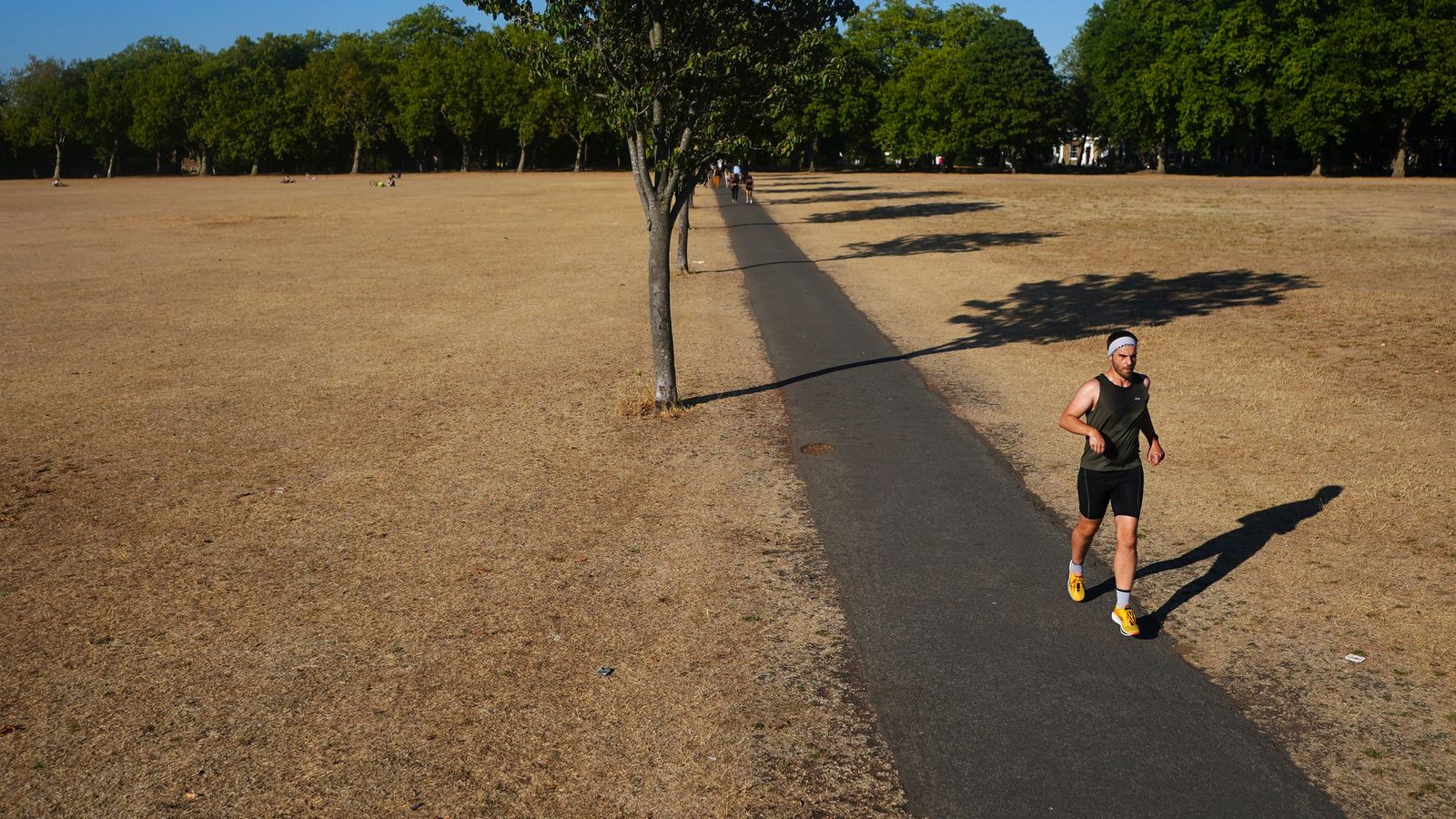 Droughts have been declared in parts of southwest, southern and central England and all of eastern England as high temperatures continue to fry the country.

The affected areas are:

The announcement means residents in those areas can expect to see restrictions placed on domestic and commercial water use.

While moving to drought status does not automatically trigger actions itself, it does mean the Environment Agency and water companies will implement stages of pre-agreed plans.

These plans follow local factors including rainfall, how much water is left in rivers, reservoirs and lakes, as well as temperature forecasts and water demand, and lead to temporary use bans, such as hosepipe bans, being introduced.

Residents and businesses in the affected areas have been urged to be “very mindful” of the pressures on resources and told they should use water wisely.

“We are currently experiencing a second heatwave after what was the driest July on record for parts of the country,” Water Minister Steve Double said.

“We are better prepared than ever before for periods of dry weather, but we will continue to closely monitor the situation, including impacts on farmers and the environment, and take further action as needed.”

The Environment Agency has said essential supplies of water are safe, and it is urging water companies to continue with their precautionary planning. 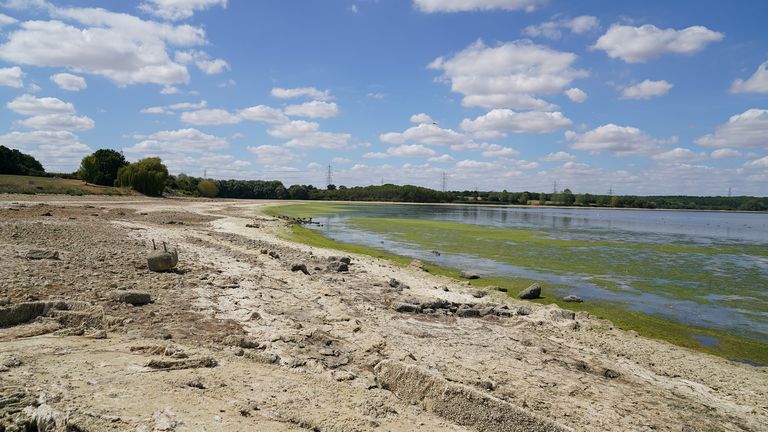 Drought declared in parts of England

Many parts of the country are experiencing sweltering temperatures and little rainfall, with an amber extreme heat warning now in place until Tuesday 16 August.

By Friday afternoon, temperatures are set to soar as high as 35C (95F) in southern areas of the UK, which will be hotter than the Bahamas, Jamaica and Barbados.

Read more:
Hosepipe bans: What are the rules – and what are the exemptions?
What and where is the ‘exceptional’ fire risk – and how to avoid one

An amber extreme heat warning has also been enforced across much of southern England and parts of eastern Wales.

Originally, it was due to end at 6pm on Sunday, but it has since been extended until Tuesday 16 August.

However, the Met Office has issued a yellow thunderstorm warning for most of the UK on Monday, warning of a “small chance” homes and businesses could become flooded quickly. 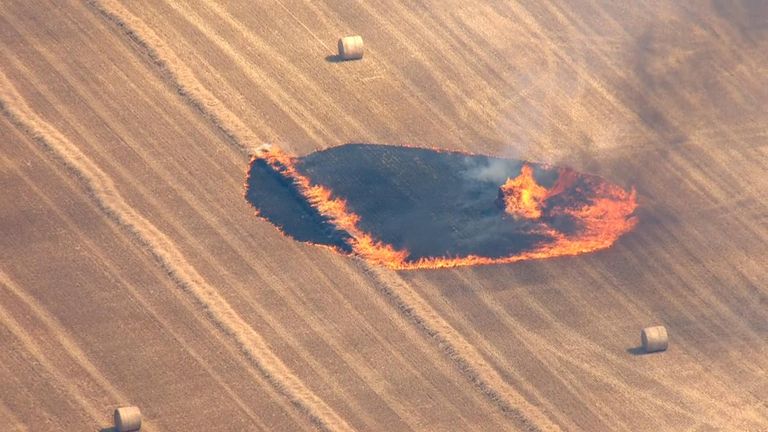 What is a drought?

Although all droughts are caused by a period of low rainfall, there is no single definition for one, meaning each is different.

The ongoing dry conditions – following the driest July on record for some areas combined with last month’s record-breaking heatwave – have depleted rivers, reservoirs and aquifers.

According to the Environment Agency, there have been five consecutive months of below average rainfall across all geographic regions in England and above average temperatures.

As a result, soils have dried up, hitting agriculture, water supplies and wildlife and raising the risk of wildfires.

The nature, timing and effects varying according to location, and which sectors are affected such as public water supply, agriculture, the environment, or industry are considered when declaring a drought for an area.

The National Drought Group made up of senior decision-makers from the Environment Agency, government, water companies, and key representative groups met earlier on Friday before announcing the drought status.

There are four stages of drought:

• Prolonged dry weather stage (yellow) – where the possible impacts include a heightened risk of environmental damage such as a risk to wildlife and plants
• Drought stage (amber) – stress on public and private water supply sources, reduced agricultural and horticultural crop yields, localised wildfires and long-term habitat and wildlife impacts
• Severe drought stage (red) – widespread long-term environmental damage, widespread wildfires, failure of crops or plants and shortage of fodder and drinking water for livestock, failure of public and private water supplies
• Recovering drought stage (amber) – which depends on the type and severity of the preceding drought

The two most recent droughts were declared in 2018 and a more severe one in 2011.

Where have hosepipe bans been enforced?

In a bid to combat depleting water supplies, hosepipe bans have already been implemented in some areas.

Southern Water has imposed a hosepipe ban on customers in Hampshire and the Isle of Wight, and temporary restrictions on water use are in place for South East Water customers in Kent and Sussex.

Similar rules announced by Welsh Water for Pembrokeshire and Carmarthenshire are due to be implemented later this month.

On 26 August, Yorkshire Water customers will also be banned from using a hosepipe to water their gardens, clean their vehicles, fill their swimming pools or clean their homes.

However, they will still be permitted to complete those activities with tap water from a bucket or watering can, or using water that is not sourced from taps.

And Thames Water has signalled it will introduce a hosepipe ban in the coming weeks as the hot, parched summer continues to take its toll.

‘Heartbroken’: Pfeiffer and Snoop among stars paying tribute to rapper Coolio
Florida pummelled by one of the most powerful hurricanes in US history
Train firm rolls out new tech to tackle ‘leaves on line’ autumnal delays
Putin wants 300,000 reinforcements. Where will they go?
Favre charity gave to USM while he sought funds