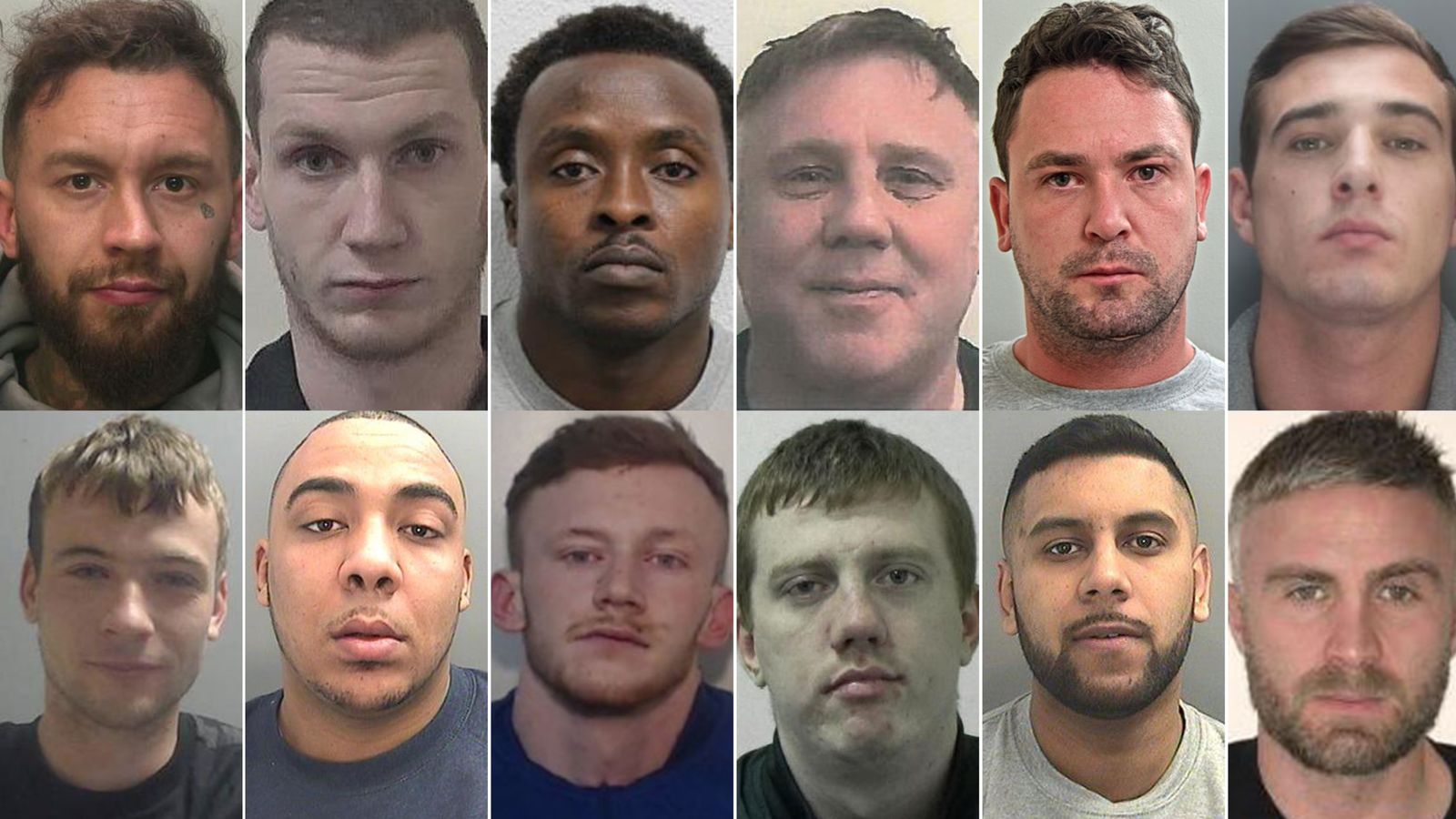 Twelve of the UK’s most wanted fugitives believed to be hiding in Spain are the subject of a new appeal – over crimes including drive-by shootings and major drug dealing operations.

National Crime Agency (NCA) officials want people to contact them with information about any of the suspects, insisting the country that has long been popular with British criminals fleeing justice is “not a safe haven”.

They say they aim to apprehend the men – whose alleged crimes also include supplying firearms and ammunition – after a previous campaign resulted in 86 people being arrested.

“Spain is not a safe haven”

Among those being sought is 41-year-old Nana Oppong.

He is wanted by Essex Police for the drive-by murder of grandfather Robert Powell, 50, who was shot eight times with a 9mm pistol in June 2020. It is alleged he and the victim were from rival criminal factions.

Also being hunted is 30-year-old Jack Mayle who is suspected of running a drug line supplying MDMA and other substances in south London, allegedly working with a dark web drugs supplier.

The appeal also features Callum Halpin, 27, who is wanted by Greater Manchester Police for the murder of drug dealer Luke Graham, 31, and the attempted murder of Anton Verigotta.

Graham, a father-of-two, was ambushed and shot dead in a drugs turf war on a street in Ashton-under-Lyne as children played nearby in June 2018. Five men were jailed in July 2019 over the execution.

Steve Rodhouse the NCA’s director, said the appeal was being run along with CrimeStoppers, Spanish law enforcement and UK police.

“Spain is not a safe haven,” he said.

“Fugitives usually continue offending while on the run and these men will be known in criminal circles wherever they are.

“The last thing the fugitives’ associates will want is the combined determination and capabilities of the UK and Spanish law enforcement focusing on them.

“Many of these fugitives will be trying to blend in to the large British communities who have made their homes in Spain, and if you are resident, you may know one of them from your town or village.

“Loyalties change over time and we urge anyone with information about these men to help us find them.”

Anyone with information about any of the men is urged to call CrimeStoppers anonymously on 0800 555 111, while callers in Spain should call the freephone Spanish number 900 926 111, which will be answered by CrimeStoppers in the UK – using translation if required.

These are the men being hunted by police, and the crimes they are wanted over:

Alleged crime: Involvement in the supply of multiple kilograms of cocaine.

Alleged crime: Supply of MDMA, methylphenidate, diazepam and LSD. Mayle fled after being charged. He allegedly ran a drug line in South London and Surrey called the Flavour Quest and worked with a dark web drug dealer.

Diamond tattoo under left eye, tattoo on the outside of his left forearm that reads ‘Croydon’. Left hand tattooed with ‘Money never sleeps’, ’12-20′ and a small heart.
His right hand has an eye design tattoo with hands around it and word ‘Littles’.
On both hands he has tattoos on his fingers reading ‘trap star’. His neck is tattooed with warriors and religious figures on horses. He has a full back tattoo. May have tried to alter his appearance.
He is known to carry weapons, is a regular gym-goer and vegan.

Alleged crime: Wanted in connection with the murder of Luke Graham and the attempted murder of Anton Verigotta. Halpin was allegedly one of three men who drove to the attack site and took part in the murder.

Links to: Spain and possibly Turkey

Date of incident: Between February and June 2020

Alleged crime: A leading role in a highly organised crime group (OCG). Using encrypted communication platform EncroChat, acquiring large quantities of cocaine from upstream suppliers and onward distribution through Cardiff and Wales. He and his OCG are estimated to have brought 46 kilos of cocaine into Wales during the period, worth up to £7,885,680.

Date of incident: Between February and June 2020

Alleged crime: Conspiracy to supply Class A drugs. Parris is alleged to be a customer of Asim Naveed’s OCG, buying cocaine from them and selling it on within Cardiff. Said to have used an Encro phone to strike deals with the OCG, including once buying seven kilos of cocaine for £89,000.

Alleged crime: Wounding with intent. Jones and a co-accused stabbed two people numerous times, causing serious injuries. It is believed Jones fled the UK and there is information to show he stayed at a hotel in Madrid the night after the stabbings but left the next morning.

Alleged crime: 12 alleged offences including possession with intent to supply heroin, supply of cocaine, possession of cannabis, assaulting an emergency worker, affray and dangerous driving. On 11 June 2019 police raided a house suspected to be used for drugs deals. Allan fled and assaulted two officers who restrained him. He was in possession of 113.29 grams of heroin. Allan was charged and appeared at court in April 2020, where he was given unconditional bail and failed to return.

Date of incident: Between March and July 2020

Alleged crime: Garforth is allegedly involved in a well-established organised crime group supplying significant quantities of cocaine and cannabis and involved in trading firearms and ammunition. It is alleged he used the now defunct encrypted comms platform EncroChat to facilitate these offences in and around northwest England and that his OCG also adulterated the drugs before moving them on.

Alleged crime: Membership of a Liverpool OCG and conspiracy to supply class A drugs. It is alleged he trafficked heroin and crack cocaine from Liverpool to Grimsby for onward distribution. His mother and brother were convicted as part of the conspiracy. Hendry is also wanted over a separate drugs conspiracy to supply cocaine in May 2018 for which he was sentenced in his absence to 10 years’ imprisonment in March 2019.

Alleged crime: Grievous bodily harm and attempted robbery of a man’s £60,000 Richard Mille watch. The victim was attacked by two men with a blade at around 1.30am after he parked his car on his home driveway. The victim refused to surrender his watch and was so badly injured he suffered life-threatening injuries and was treated in a critical care unit for puncture wounds, a collapsed lung and many lacerations. The victim heard one of the attackers say he had cut himself in the attack, and Roberts’s blood was later identified at the scene.

Wanted by: The NCA and Police Scotland Organised Crime Partnership.

Alleged crime: Multiple offences relating to organised crime in Scotland and the wider UK, namely in relation to the seizure of about one tonne of cocaine found within a shipment of unaccompanied freight arriving at the Port of Dover in September 2020, and in relation to the production and supply of approximately 28 million Etizolam ‘street valium’ tablets, seized following a raid on a suspected pill factory in Kent in June 2020. He is also wanted in connection with two suspected wilful fire-raising attacks on properties in the Lanarkshire and Forth Valley areas in May 2020.
Members of the public are advised not to approach Stevenson directly but instead to contact authorities.

Alleged crime: Wanted in connection with the murder of Robert Powell, 50. Oppong allegedly drove to a party where Powell was present and shot him eight times with a 9mm pistol. Oppong and Powell allegedly belonged to rival criminal networks.

Description: Athletic appearance, two circular scars above his right eye. A series of small scars on his left hand and fingers. Stomach scar near naval.

PM ‘will have plenty to say about that when the thing’s finished’ as 50 more partygate fines are issued
Ukraine war: Latest developments on the ground in Ukraine
Bid to ‘future proof’ US state against threats to women’s abortion rights
Ireland fails to make Eurovision final – but a song about Meghan Markle has better luck
Champagne bottle donated by Tory party chairman auctioned as ‘souvenir of partygate’