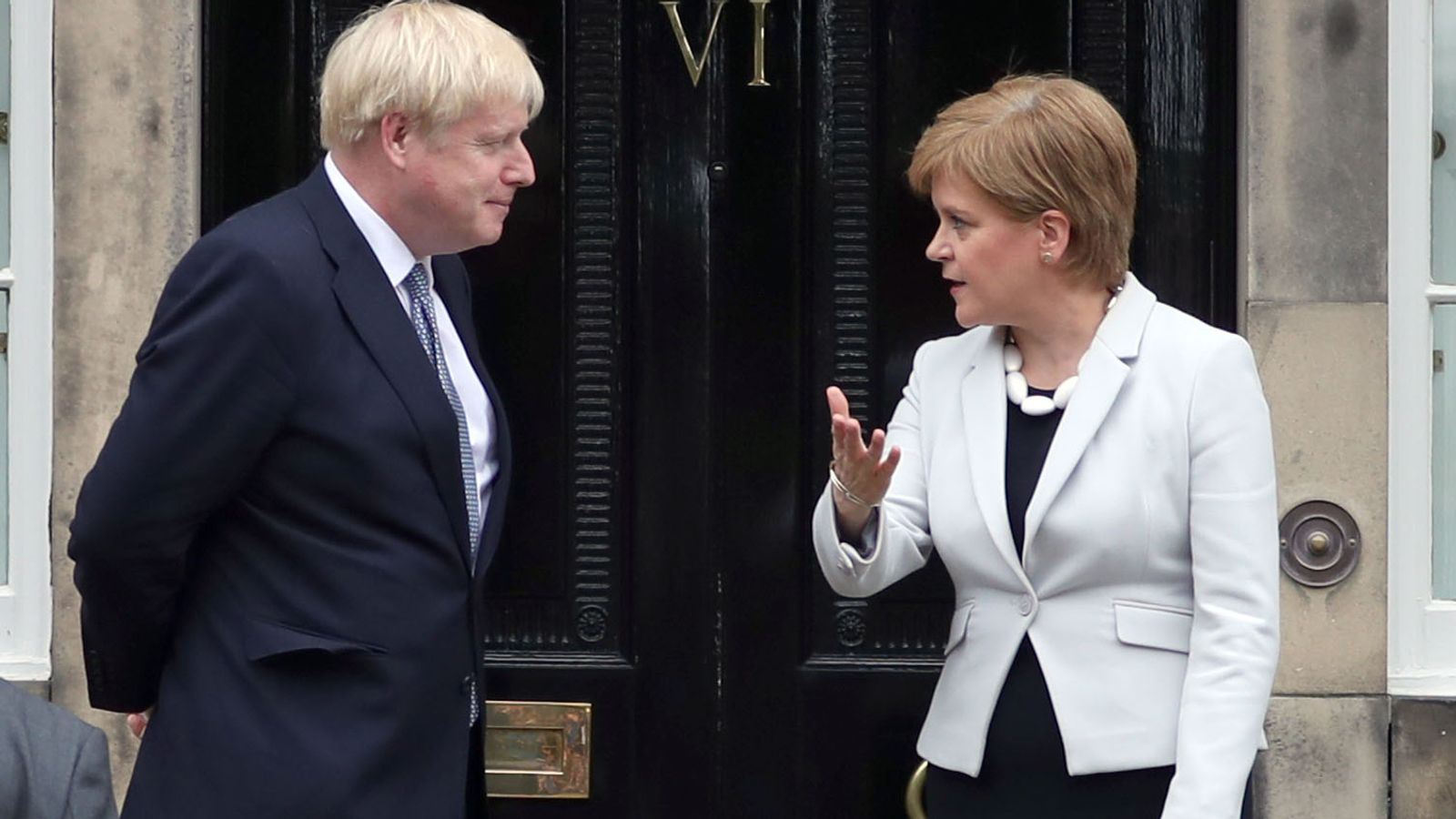 Nicola Sturgeon has said it is “a bit strange” for Boris Johnson to have declined her invitation to meet for talks during the PM’s trip to Scotland this week.

Speaking to reporters, Scotland’s first minister said “most people will think it is a bit odd” that the prime minister did not want to discuss COVID-19 recovery plans with her, but that the decision to not accept the offer is “on him”.

On Tuesday, the PM declined Ms Sturgeon’s invitation to meet for talks while he is in Scotland this week.

The first minister had invited the prime minister to her official Edinburgh residence, Bute House, to discuss their plans for boosting Scotland and England’s economies as the two countries build back following the pandemic

But in a reply to Ms Sturgeon’s letter, Mr Johnson said: “I am keen to arrange an in-person meeting with you and the other first ministers and deputy first minister to build on the constructive discussions we had earlier this summer.

“We agreed then that we should establish a structured forum for ongoing engagement between the government and the devolved administrations to deliver tangible outcomes in the interests of people throughout the UK.”

The prime minister added: “I look forward to meeting with you soon and working together in the interests of people in all parts of our country.”

Ms Sturgeon said it is for the PM to explain why he declined her invitation.

“I don’t feel snubbed, I think most people will think it is a bit odd and a bit strange that we have got a prime minister visiting Scotland who talks a lot, rightly, about the need – despite our political differences – for us to work together where we can on getting through COVID and into COVID recovery but doesn’t take the opportunity when in Scotland to come and talk to me directly about how we might cooperate and work together,” Scotland’s first minister told reporters.

“I think people will just find that strange and it is for Boris Johnson to explain, I suppose, why… this would have been the first opportunity given COVID for us to sit down appropriately socially distanced and have a face to face chat.

“And I think it would have been a good opportunity. I was getting ready to welcome him to Bute House today.

“There is lots that Boris Johnson and I fundamentally disagree on but we both lead governments that are trying to get our countries through COVID and so there is a lot for us to cooperate on.

“So a missed opportunity, but that is on him.”

In her original letter, Ms Sturgeon acknowledged the two leaders “differ politically”, but said the Scottish and UK governments “must work together where we can”.

The two have sometimes taken different approaches to COVID restrictions, with the devolved governments responsible for their health services.

Almost all legal restrictions in England were lifted on 19 July, while the first minister has confirmed that most COVID measures will be scrapped next Monday (9 August).

While the legal requirement to wear face masks in a range of settings ended in England last month, Ms Sturgeon has said that face coverings in shops and on public transport will remain mandatory for “some time to come”.