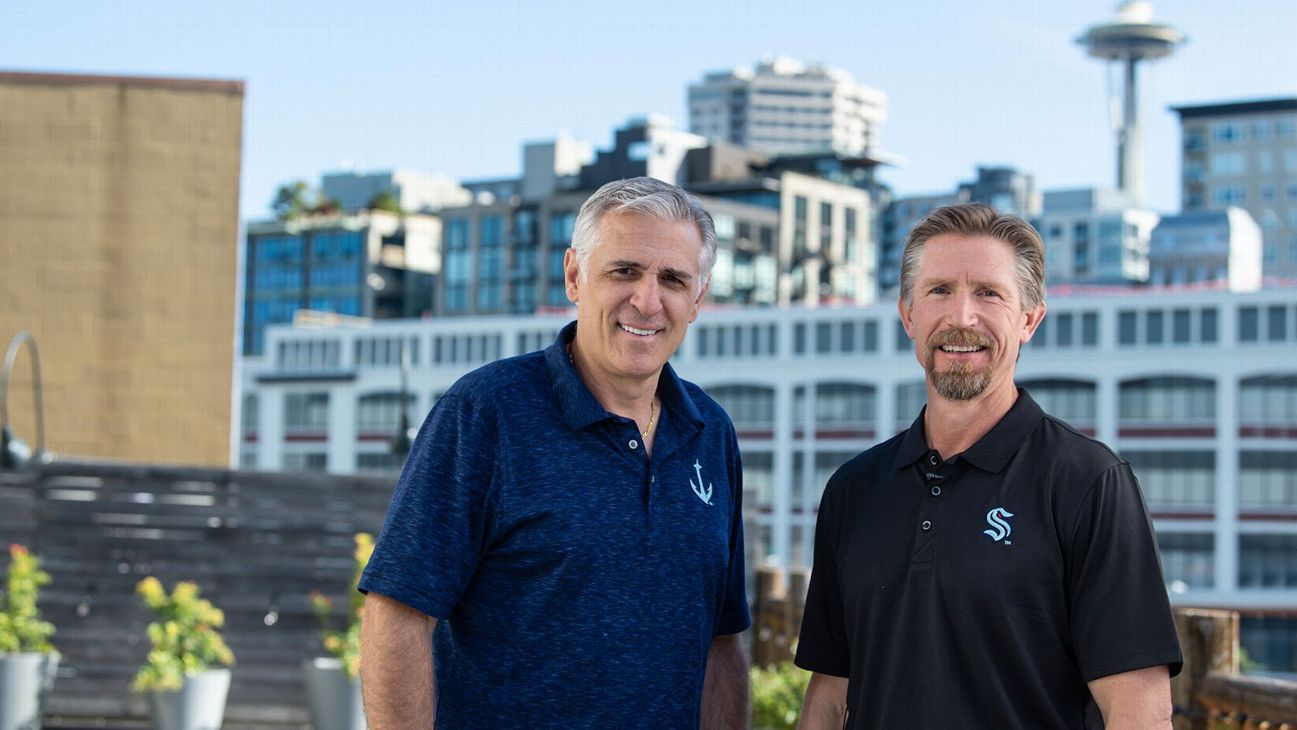 Ron Francis and Dave Hakstol didn’t know they were participating in a four-week audition.

They bonded at the 2019 IIHF world championships in Austria and Slovakia, where Francis was part of Team Canada’s management brain-trust and Hakstol was a member of the men’s team coaching staff.

“I got to know him as a person and watch his work ethic, building that respect for what he can do,” Hakstol said.

Francis was named the first general manager for the expansion Seattle Kraken later that year. After his first NHL head coaching gig with the Philadelphia Flyers from 2015-18 — making the leap from coaching the University of North Dakota — Hakstol was hired as an assistant coach with the Toronto Maple Leafs before the 2019-20 season, working under Mike Babcock and then Sheldon Keefe.

Francis kept him in mind as he cast his net for the first Kraken coach. On June 24, it was announced that Hakstol got the job — a surprise to some, given that his name wasn’t among the ones rumored to be in the running.

But Francis wasn’t surprised in the least that Hakstol ended up being his guy.

“As we went through the process, he was certainly a guy that I had interest in talking to. He’s got the experience. It was maybe a big jump from college the first time, but now he’s been in the league for six years, he’s worked under some different coaches and has a bit more experience, so we’re comfortable in that regard. We were always comfortable with his hockey acumen,” he said.

ESPN spoke with Hakstol recently about getting this coveted job, the upcoming expansion draft, learning from failures, and whether the Vegas Golden Knights have set the bar uncomfortably high for Seattle.

ESPN: Let’s start at the very beginning: What was your reaction when you heard Seattle’s nickname and saw its colors for the first time?

Hakstol: [Laughs] I didn’t know what it was at the time. I had learn what it was.

ESPN: You mean what a Kraken was?

Hakstol: Yeah. But something I’ve learned over time is to be open to new things, right? Once I started seeing the merchandise and learning what it was and seeing how attached the fans were to the name, it’s really cool. Seattle’s going to be a great spot for the NHL. You’re going to see a lot of the merchandise, not only in Seattle but around the NHL.

ESPN: How did this stay so quiet? Were you watching all the speculation about possible coaches and thinking “wow, I’ve really kept this under wraps?”

Hakstol: Around 7:45 a.m. PT, the day of the announcement, it started to get out a little bit. I don’t think we really tried to keep anything quiet. We just dealt directly with one another. There was no special effort to keep things quiet. I obviously paid attention to everything that was going on. Speculation is part of the business, and there were a lot of really good people that were a part of the process. It’s a pretty special opportunity there.

Hakstol: Yeah, that’s unique, when there’s no players that are obviously in place. But the most important part of the [hiring] process, in knowing that it’s the right spot, is the people that you’re working with. I had a chance to get to know Ron a few summers ago and then through the interview process. That’s still the most important thing. Players aren’t in place, but philosophically, we can be on the same path and really work well together.

As we were over at the world championships, I understood what [Francis] was seeing on the ice. He places a ton of value on players that can think the game. Intelligent players. The pace of the game is a really big aspect. But most importantly, the competitiveness.

ESPN: So in other words, Ron Francis likes guys that who play like Ron Francis.

ESPN: Francis spoke a lot about second chances at your press conference. You’ve said in the past about failure that “if you evaluate it, deal with it, learn from it, a lot of good can come out of it.” I don’t want to qualify the Philly experience as a “failure,” but what did you learn about yourself in evaluating it?

Hakstol: The bottom line was there were successes and there were failures, and as you add it up, we didn’t get to the finish line. I didn’t get to the finish line of what I had hoped to accomplish. That’s the bottom line. But I learned more about the everyday business of coaching and building an NHL team, from start to finish every year. That’s the biggest part of the experience that I take away.

Now, I have some experiences doing this once on my own. And I worked with a couple of really good coaches in Toronto to see their way of doing things. That’s all made me a better coach than I was six years ago.

ESPN: You were an outstanding college coach. I have to imagine dealing with college-aged players is a lot different than dealing with NHL players. What have you learned about managing pros?

A seven-part, behind-the-scenes docuseries going on and off the ice and in locker rooms for an all-access pass during the pursuit of the Stanley Cup. Watch on ESPN+

ESPN: Obviously, part of that communication process is having players in the dressing room who can help sell your message, who can be your guys in the room. Are you looking to maybe bring in some guys that you already have a relationship with or that you’re familiar with that could be maybe eyes and ears in the room?

Hakstol: The process for [the expansion draft] … Ron and his staff have been preparing for that, and they’re going to approach that draft with all the knowledge that they built. I’ve been asked my thoughts about guys along the way, and if I have clear opinions on them, I’ll offer those opinions. If the right player is available, and that previous relationship exists, I think that’s a head start. It’s a benefit, but not a main focus. Everything after [the expansion draft on] July 21 is about building relationships with all the new players.

ESPN: It sounds like Francis and the front office are selecting this roster. That maybe you can give your input, but you’re not sitting there with a back-of-the-napkin expansion list, and saying “hey, get me this guy.”

ESPN: Is that a bit of a bummer?

ESPN: The front office is very analytics-driven. I know that was the case in Toronto, too. You seem like someone who is open-minded about them but likes to keep a foot firmly planted in the “this is still a human game” realm. Which side wins out in the end?

Hakstol: Coming up of the college game, we used very little analytics. We used some basic analytics data, but certainly not in the modern sense. But I learned a lot about it through my time in Philadelphia and as an assistant in Toronto. And I think it’s a great tool. It really is.

There’s an awful lot of good information that can help us as coaches. We’re gonna use and take that information. We have a lot of very smart people in the analytics department. I want to take full advantage of the information they can provide us, so that we can connect that with the human side of the game.

ESPN: Are you ever worried that going with your gut too much, with a numbers-driven front office, could create a conflict?

Hakstol: No. I gotta be who I am, and I’ll do that. I think the real key there is that you work hard and gain all the information. Because all that goes into gut feeling, right? The preparation, the mindset that you have. Those all help.

ESPN: You worked with newly hired assistant coach Paul McFarland in Toronto, but adding Boston’s AHL coach Jay Leach was a surprise for a lot of us. How did he come to join your staff?

Hakstol: I was just fortunate that after an initial phone call he had interest. It’s not a long-standing relationship. We didn’t know each other before the interview process. I’ve just been really impressed with what he’s done. You’ll be hard-pressed to find a player that didn’t love playing for him, and had gotten a lot better. He’s got a unique ability in that sense. I was thrilled to have him join us in Seattle.

A panel of NHL players, coaches, GMs and other front-office personnel ranked the best players at each position:

ESPN: Have you spoken to anybody that was involved with the Vegas Golden Knights when they started, to get some advice?

Hakstol: I know [Gerard Gallant] well and we’ve stayed in touch. We saw each other two world championships ago … you know, maybe I’ve been in too many world championships? That’s not a good sign, right? [Laughs]. But in 2017, we were in Paris and Cologne together, and that’s when I got to know Turk well, and he had accepted the job in Vegas. I kind of got an early look at things through him as he was going in, and then had the benefit of seeing the great job that he did there.

ESPN: Was it weird having him in the mix for this job?

Hakstol: I wouldn’t say it was weird. He’s a great man, great coach. The world is too small to be affected by that. Anything good that happens to him, I wouldn’t be anything but happy.

ESPN: There was a time in recent NHL history when the expectations for an expansion team were quite low. Then came the Golden Knights and their run to the Stanley Cup Final in Year 1. Did they ruin the process for the Kraken? For example, you guy have better odds to win the Stanley Cup than Detroit and Buffalo.

ESPN: Finally, a lot of us hadn’t seen you in a while. We didn’t realize you had a goatee now. Did you grow it as a point of demarcation in your career? To be a “new” Dave Hakstol in Seattle?

Hakstol: [Laughs] No, I had to go into quarantine when I got to Toronto in late November, and I didn’t shave for two weeks. Bam, there it was. My wife and my family weren’t up there with me, so the goatee stayed. I started out with a full beard, and that was awful. So I shaved it and it stayed with me. At least for now.