The government has announced it is effectively ending all prosecutions related to crimes committed during the Northern Ireland Troubles.

Described as a de facto amnesty for former British soldiers and former paramilitaries, the new statute of limitations will apply to incidents prior to the 1998 Good Friday Agreement.

It was confirmed in parliament on Wednesday by Northern Ireland Secretary Brandon Lewis.

“We know that the prospect of the end of criminal prosecutions will be difficult for some to accept and this is not a position we take lightly,” he told MPs.

“But we’ve come to the view that this is the best and only way to facilitate an effective information retrieval and provision process, and the best way to help Northern Ireland move further along the road to reconciliation.

“It is in reality a painful recognition of the very reality of where we are.”

Mr Lewis said it was “clear the current system for dealing with the legacy of the Troubles is not working”.

“It’s now a difficult, in fact painful, truth that the focus on criminal investigations is increasingly unlikely to deliver successful criminal justice outcomes, but all the while it continues to divide communities and it fails to obtain answers for a majority of victims and families,” he added.

Mr Lewis said the government would legislate to set up a new independent body to focus on the recovery and provision of information about Troubles-related deaths and most serious injuries.

“This body will be focused on helping families to find out the truth of what happened to their loved ones. Where families do not want the past raked over again they would be able to make this clear,” he said.

“For those families that want to get answers, the body will have the full powers to seek access to information and find out what happened.”

The move is opposed by all five of the main political parties in Northern Ireland and by the Irish government.

Democratic Unionist Party leader Sir Jeffrey Donaldson said it would be “rejected by everyone in Northern Ireland who stands for justice and the rule of law”.

It has been driven by a government pledge to end the historical prosecution of soldiers who served in Northern Ireland.

But many victims say they can’t believe veterans would want an amnesty that also applies to the very terrorists who murdered their comrades.

It is 30 years since Kathleen Gillespie’s husband Patsy was murdered in a particularly brutal IRA attack.

They chained him to a van containing a bomb, held his family at gunpoint and ordered him to drive it to a military base.

The 1,200lb bomb exploded at the Coshquin base near the border, killing the father-of-three and five British soldiers.

Kathleen said: “I feel robbed. I have this thing in my head that when it’s an important person that’s been killed, their thing is investigated and their thing is solved.

“We’re just the ordinary common people so it’s alright to push us to the one side,” she added.

Thirteen civilians were shot dead and a 14th fatally wounded when the British Parachute Regiment opened fire in Londonderry in January 1972.

Only one veteran was charged with murder but the case against ‘Soldier F’ was halted last week by public prosecutors.

Mickey McKinney, whose brother William was one of the victims, feels an amnesty only adds to the pain of Bloody Sunday.

Forty-nine years on, his memories of 30 January, 1972, remain vivid and he is fiercely opposed to any statute of limitations in Northern Ireland. 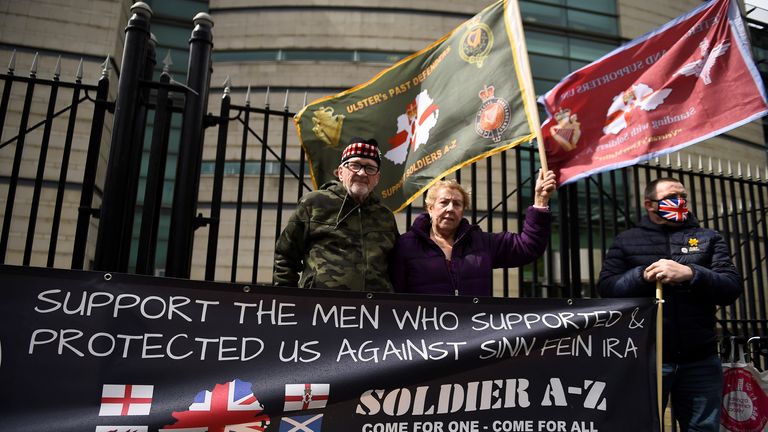 He recalled: “We were trying to escape the effects of the gas and I remember turning round and I saw the Paras coming in.

“I don’t trust the British government. Would you trust them if they murdered your brother and told lies about him?”

Relatives of victims of the Birmingham pub bombings have described the plans as “obscene”.

Julie Hambleton, whose older sister Maxine was among 21 people killed in the 1974 blasts in Birmingham, has written to Prime Minister Boris Johnson on behalf of the Justice 4 The 21 campaign group to decry the planned legislation.

“Tell me prime minister, if one of your loved ones was blown up beyond recognition, where you were only able to identify your son or daughter by their fingernails because their face had been burned so severely from the blast and little of their remains were left intact, would you be so quick to agree to such obscene legislation being implemented?” Ms Hambleton asked.

“You would do everything in your power to find the murderers and bring them to justice, which is exactly what we campaign for every day.”