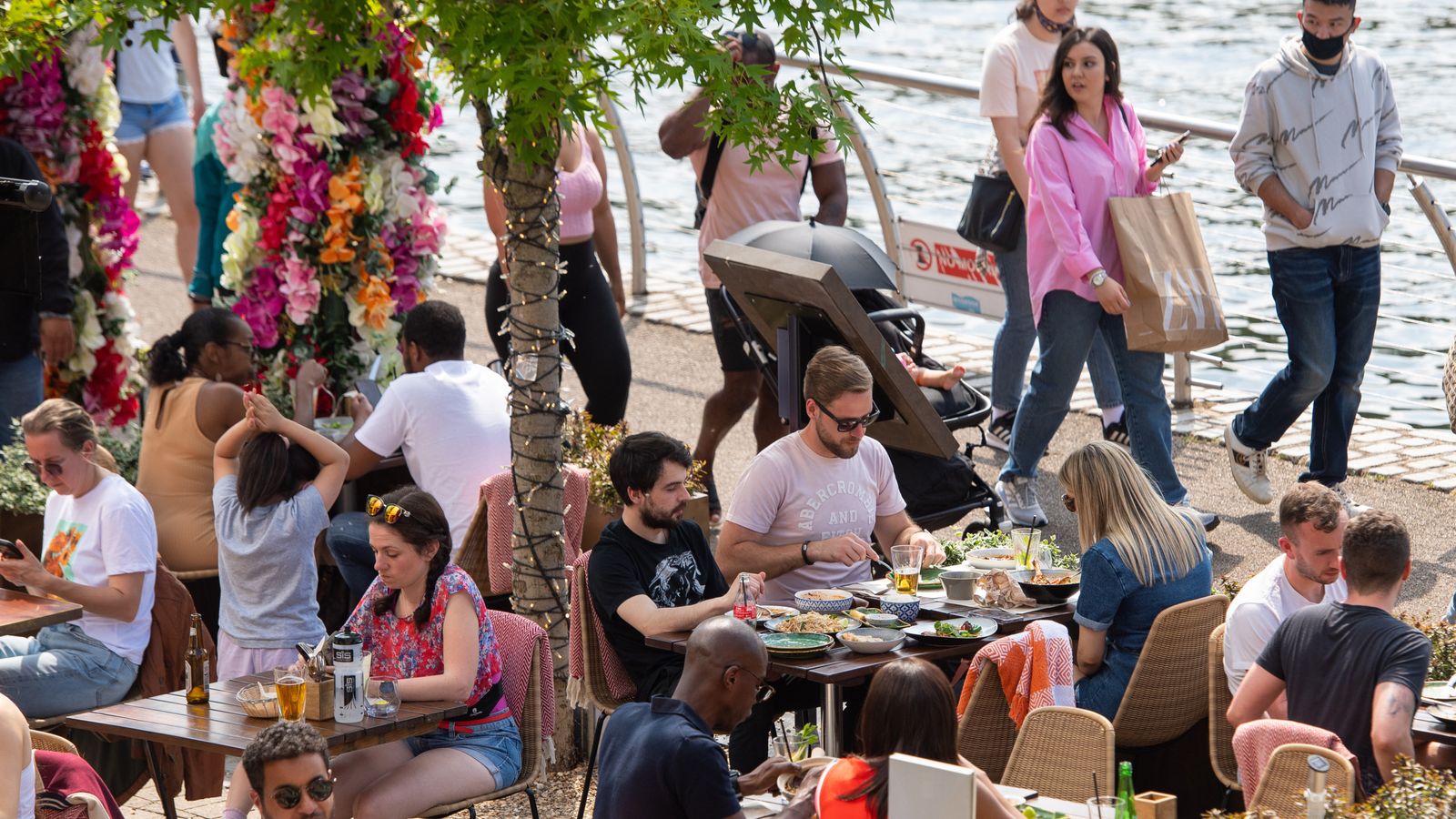 Card spending on travel and eating out hit a new post-pandemic high during the half-term holiday while job adverts in the hospitality sector have surged, according to latest data.

The figures were published by the Office for National Statistics (ONS) as part of a regular series of real-time indicators showing the impact of COVID-19 on the economy.

They also showed that the proportion of the UK workforce on furlough in May had hit 7%, or about 1.8 million people – a new low since the data series began in June last year.

Bank of England data, tracking payments by card processors to 100 major retailers, showed “social” spending, which includes travel and eating out, continued recent increases to reach a new high since the start of the pandemic, though still only at about 89% of February 2020 levels.

It was up from 85% a week earlier and just below the level of 91% in March, shortly before the first lockdown.

The level had dipped to as low as 20% in the spring of last year as much of the economy was closed.

Spending classed as “work-related”, including public transport and petrol, was also at its highest since early last year – and nearly a fifth above the February 2020 benchmark.

Overall card purchases in the week ending 3 June were at 102% of the pre-pandemic average in February 2020, up from 95% in the previous week – though it was not the first time spending has topped pre-pandemic levels since lockdowns began to ease in April.

The ONS highlighted that the latest period covered a bank holiday, school half-term and May pay day for many workers.

The figures also provided a snapshot of how the hospitality sector is faring – with data from booking website OpenTable showing the average number of seated diners at restaurants in the week to 7 June at 147% of the same period in 2019, though this was down on the previous week.

At the same time, figures from online jobs search site Adzuna, as of 4 June, showed the recruitment squeeze facing the sector with the volume of adverts for “catering and hospitality” roles at 140% of the February 2020 average, up from 57% in April.

Meanwhile Department for Transport data showed the volume of motor vehicle traffic at the start of this week at 99% of February 2020 levels as the economy gets back into gear.

But footfall data from Springboard showed that, while visits to shopping areas rose last week, it was still at only 85% of pre-lockdown levels.

The figures come as the British Chambers of Commerce predicted a consumer-led rebound for the UK economy this year but warned it would be held back if lockdown restrictions are not eased on 21 June as currently planned.